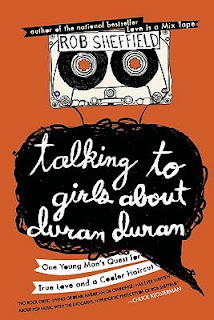 When I read Rob Sheffield's Talking to Girls About Duran Duran this summer, my friend Mary was never very far from my mind. This is the kind of book that I knew she would eat up (although not as much as Confessions of a Prairie Bitch, which she got for Christmas.) I had really loved Sheffield's bittersweet memoir of his young wife's death in Love is a Mix Tape and just reading about his newest book made me convinced I would love it just as much as I did Love is a Mix Tape.

Was I right? Yes and no. Talking to Girls About Duran Duran lacks the cohesiveness of his previous effort. Rather than tell one big story, Sheffield settles for telling a bunch of little stories from his adolescence and young adulthood. Each chapter is a new story and a new song. Sometimes the song relates specifically to the story, other times not. The thing I really appreciate about Sheffield is that he really really loves pop music. Reading his words, there's no mistaking it. He grew up just slightly ahead of me (he is six years my senior) so his pop music experience is one that is very different from mine. Additionally, his musical taste has a small sliver of overlap with mine. Even so, I related to it not so much based on the specifics of his story but because pop music was really in his genes. I recognized myself in more than a few spots.

There were so many different stories that to try to distill them into a short blog post is folly indeed. However, I would be remiss if I didn't mention the chapter that made me think of Mary the most - the chapter on the cassingle. Sheffield makes a strong argument that the short-lived format was an absolutely perfect format for the type of music that it contained. Introduced in 1987 and pretty much extinct by the mid 90s, songs like Tone Loc's "Funky Cold Medina" and Kriss Kross' "Jump" are as throwaway as the cassingle itself. I still remember the first cassingle I bought - Fleetwood Mac's "Everywhere." Why I did that I have no idea as I had already bought the album. The reason the chapter made me think so much of Mary is because one night nearly a decade ago, Heidi and I visited her at her apartment to ask her to be a godmother to our then unborn child. At some point during the night, she pulled out her cassingles and well, I was amazed. She had an amazing collection of cassingles, one that I'm pretty sure she still has.

My cassingles were taken to Good Will in a fit of decluttering madness several years ago. Sometimes I kind of regret doing that, but mostly I don't.

Talking to Girls About Duran Duran is an uneven but still worthwhile read. Lovers of pop music everywhere will find something that they can relate to. All I know is that anyone who can write so much about cassingles is on my list of "guys I definitely want to hang out with."
Posted by Dan at 12/29/2010 07:15:00 PM

Yes, the cassingles and cassettes are still under my bed taking up a heck of a lot of space! I just can't seem to get rid of them, though. :)