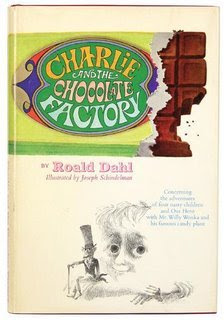 Anna and I read this book over the course of about three weeks this summer. We read a chapter or two before bed nearly every night. Although she'd seen the movie (the Johnny Depp one, not the Gene Wilder one), I wanted her to be familiar with the original book. I remember back when I saw the 2005 film, I wanted to keep Anna from seeing it until she read the book, but I think someone bought the movie for her for her birthday or Christmas one year and well, there went that idea. (PS - I'm not as keen on the movie now as I was in that blog post. Both the 1971 and the 2005 versions have their merits.)

I was in third grade when I was first exposed to this book - our teacher read us a chapter a day. I'm having a hard time remembering if I had seen Willy Wonka & The Chocoloate Factory but if I recall my reaction to the chapter that ends with them about to step into the chocolate room, I'm thinking I hadn't. The story is, of course, well known. Chocolatier (and general weird guy) Willy Wonka invites 5 children into his chocolate factory. The five kids are picked by luck of the draw. Concealed inside five ordinary Wonka bars are five golden tickets. The first four tickets go to kids that are of the least-deserving ilk. Appropriately, they are all gluttons to some degree. Then there's sweet innocent Charlie who lives in a one-room shack with his parents and four bedridden grandparents. It appears through most of the first third of the book that he will not get a golden ticket, but based on the title alone, you know that he will.

The shenanigans inside the factory are more than worth the price of admission. Roald Dahl's imagination ran wild on this one. It is in this respect that the 2005 film adaptation of the book is superior to the previous because the technology allowed for more of this to be seen. But what it really is at its center is a morality tale - bad behavior is punished while patience and perseverance are rewarded with the keys to the factory.

I enjoyed this book this time around because it reminded me of how easy of a read it is for kids in the 8-12 range. I think that a lot of kids would really enjoy reading this, especially if they've seen either film version. I think it serves as a really good example of comparing movies based on books to their source material. Generally, they are never as good and it comparing the two really started a good conversation with my own kid. Even though I tried to convince her that when you read the book, you get to see whatever you want, I fear reading is way too solitary of an activity for my little social butterfly (how did two introverts birth an extrovert?) plus who among us isn't drawn in by CG effects and the ability to put anything on the screen these days?

You're gonna run out of time for your book challenge unless you do some serious reading around Christmas ;)

I'm on the 25th book right now, so I'm almost there. What I'm really behind on is blogging them! ;)