This weekend was the first of a few Christmases we have lined up this year. I can't keep track of how many there are actually going to be or when they're going to take place. I've kind of adopted the attitude of "you just tell me where to be and when to be there. Provided I'm not working, I'll show up." Truthfully, I find it to be much less stressful just to go with the flow rather than getting worked up and end up not enjoying any part of the holiday.

But last night's Christmas was what we lovingly refer to as "Tina's Christmas." It's called that because of a 15+ year-old inside joke that started between Heidi, Jeff and me. It refers to Christina "Tina" Crawford, adopted daughter of Joan Crawford and author of celebrity tell-all turned camp-classic Mommie Dearest. Don't ask me why the joke started, it just did. It's part of the history now and honestly, if it weren't there, life would be A LOT less interesting. But Tina's Christmas is tradition now, so much so that we book it a year in advance and God preserve your soul if you schedule anything else on that weekend.

Food is consumed, gifts are exchanged, alcohol is drunk, games are played. We always try to outdo each other when filling out the tags on the presents. This photo below gives you a pretty good idea of what I'm saying. 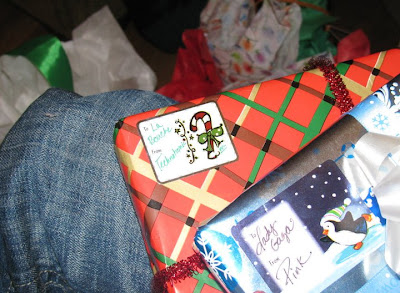 The best part of this was when Anna was passing out presents and she said "Who is La Bouch?" (pronouncing it so that it rhymed with "ouch") Close, but no cigar Anna. Among the other people receiving presents last night were Richard Burton & Liz Taylor, Barbara Mandrell, Dexter, 'Lizbeth Walton, Wonder Woman, Starbuck, Liza (from David Guest) and many others I can't remember. Seriously, it's the best part. It gets so bad that sometimes the gift giver has to think about who it was really for. It's kind of a very camp Christmas.

And somewhere along the line, Santa started to visit early. We're starting to push up against the age where Anna might start to not believe in Santa for much longer (she's 9 and not showing very many signs of disbelief) so we kind of milk it a little bit. Last year, he brought everyone pajamas and this year was the same thing. We orchestrate this quite elaborately to perpetuate the belief. Anna was really anticipating this to happen this year and so when it did, she came down the stairs declaring that she KNEW it would happen because she still believed.

Of course, a man in a red suit did not actually visit. We all had drawn names to see who would buy pajamas for who and Jeff got my name. We all had e-mailed our pajama sizes and preferences and I think for the most part, everyone was pleased. Inside my package was a pair of flannel pants and a big navy thermal shirt that I wore to bed last night. Also in the package was a T-shirt that might only ever be a bed shirt, I'm not sure. I did wear it today. I think the image kind of speaks for itself. 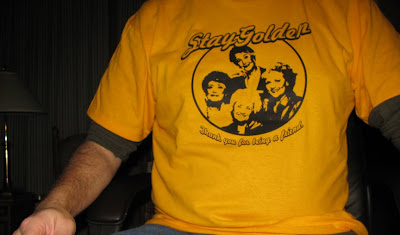 Really, coming from Jeff, it's a perfect gift. The Golden Girls is beloved by gay men far and wide, but he and are among the few straight men I know that enjoy the HELL out of it (although I do know of at least one other - you know who you are.) It really is - pardon the pun - comedy gold. The writing is so strong, the performances so perfect that even in the later seasons when Blanche was ultra slutty, Rose extra dumb and Dorothy extremely bitchy, it still didn't suffer. I've seen every episode multiple times and Heidi always says that watching me laugh my head off for the hundredth time is, for her, the best part of watching it. My friend Mary, who was also at Tina's Christmas, is fond of saying that in high school, while her friends were out getting laid on Saturday night, she was at home watching The Golden Girls. Well, so was I.

What I love about this gift is its subtle meaning. In many ways, what Tina's Christmas is all about is how everyone is loved for being exactly who they are, despite AND because of their flaws. These folks are our family of choice and it's so important to me that this continue in some form or another for as long as it can.

I've spent a lot of today in a funk I couldn't quite shake. That's not all that unusual for me after a flurry of activity. When the party's over, I'm more inclined to quiet introspection than anything else. It's not about turning it into something sad or melancholy, it's just about the transition. Tomorrow is back to work for four days and then a few more Christmases. I'm not getting that much time off around Christmas but I am taking eleven days off beginning December 30th for my sister's wedding on NYE. Then it'll be a week of trying to catch up and unbunge (as my brother always says) from the hustle and bustle of the season and get back to normal.

I would end this post with a "thank you for being a friend" gag, but really, it's too obvious. To all those who are family of choice to me - those present last night and others as well, just listen to that damn cheesy theme song and know what it's all about.

Good times. Was Mediapolish High School the only chorus who sang "Thank You for Being a Friend?"

Did they really? I know ours didn't. We had to suffer through dreck like "Wind Beneath My Wings."

Oh Jeebus. This is so heartwarming without being sappy that I may just sap anyway.

It's so hard to dodge the sap in posts like these that I'm always relieved when I manage to. It really was a great time and each year is always better than the one before.

Ohhhh how I need to come out there..

My god, that's a party I can REALLY enjoy! That's good attitude and lesson re going with the flow. I've got to follow that advise.