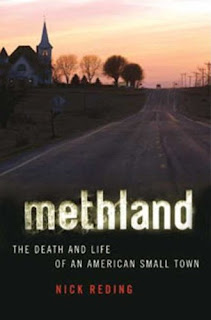 Methland was one of the last books I read this year and was the direct result of a recommendation a pharmacy classmate of mine made to me on Facebook. Before I read this book, I was not exceptionally knowledgeable about the meth epidemic. I knew that it was bad, that rural America had been hit disproportionately hard by it and that the pseudoephedrine laws in Iowa were a direct response to the rising number of meth labs. I figured that I would get an education. I didn't know the half of it.

What drew me to this book was the local connection. While it speaks about meth in general, author Nick Reding followed the meth problem in the eastern Iowa town of Oelwein. Oelwein is like a hundred other rural Iowa towns in that it has been pretty much forgotten in the new economy. Now that family farming is becoming a thing of the past and most of the money that is made from farming is not spent in the small towns surrounding the land, it was in danger of drying up and blowing away or alternately, exploding like so many of the meth labs inside its city limits.

Reding introduces us to a cast of characters in Oelwein - the mayor, the doctor with a serious alcohol problem and the county prosecutor whose parents still farm the land outside Oelwein are the main players in Oelwein's battle with meth. We meet meth addicts and meth producers. And what's amazing is that Reding treats all these people with compassion. He doesn't really make excuses for them, but he does understand that what's happening to rural America is very much a chicken/egg situation. Is rural America deteriorating because of drugs or are there drugs because of the deterioration? It's hard to tell.

But Methland is so much more than a story about meth in the Heartland. It's a scathing indictment of current economic policies. Reding is pretty ruthless in his indictment of "big food" - corporate farms that have bought up most of the land and the big conglomerate food producers that are now the only game in town. His tale of how Ottumwa became the meth capital of Iowa is all too familiar. Meat packing plant consolidated, union dismantled, wages slashed to 50% of what they were, benefits stripped. That hits right to the heart of a town's economic base. It's no wonder that many turn to drugs - either using or selling or both - in such a hopeless environment. (An aside: I've been to Ottumwa. It does not appear to be as bad as Reding paints it, but hey, what do I know.)

A riveting book that deserves to be read (despite a few factual details that this Iowan picked up), this was more than worth my time. Thanks to Alisa Shields for the recommendation!
Posted by Dan at 12/29/2010 09:30:00 PM