Oscar weekend is nearly upon us. As I mentioned in a previous post, we have seen 60% of the Best Picture nominees which is a sight better than last year when the only Best Picture nominee we had seen was Up. The Oscars are kind of a Big Thing around here. It's probably less about the awards and more about the company and camaraderie that have come to characterize every year's Oscars. I enjoy the core group of people that we always get together with - they truly are family. We are always open to more people coming in (if they dare) because honestly, the more the merrier. I work this weekend but it's day shifts so it should be okay, plus I have Monday off so I won't have to worry about having to get to bed at a decent hour.

All the talk of Oscars got me to thinking about the year that we made an Oscar mix CD for everyone. I don't think we've done that in years, and let me tell you how it's NOT happening this year as I haven't the time to put something together like that. Anyway, I dug through my big old CD wallet that houses all my burned CDs from the early 2000s. I kind of quit burning CDs en masse when I got an iPod, and it's kind of fun sometimes to look through them as they all have cover art thanks to Microsoft Publisher. It didn't take me long to find the Oscar mix CD which was creatively titled "Oscar Mix 2001." 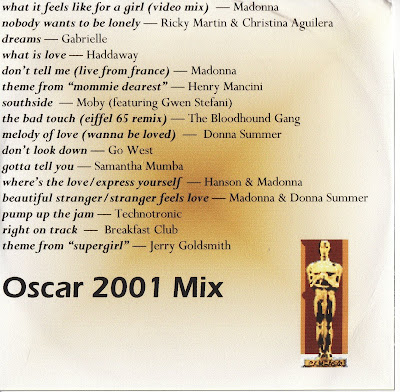 If that is not a motley mix, I don't know what is. A few points:

I think I might have to make this into a playlist for my iPod. But first, I have to get my tax shit together. I'm not remotely ready for our tax appointment tomorrow.
Posted by Dan at 2/24/2011 09:51:00 AM