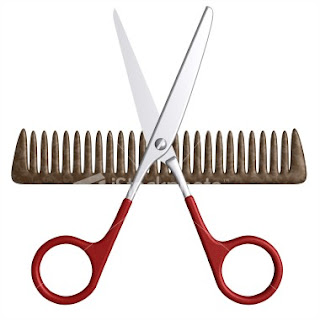 I will be embarking into the great unknown tomorrow morning at 9AM.

On December 20th, Jill Daiker gave me my last haircut. After about 5 years of haircuts, she has left Ames. In January, she got married and moved to Ireland with her husband where the pastures literally ARE greener. I knew that it was coming for quite a while, but the reality of it really didn't sink in until tonight. Tomorrow when I go to get my hair cut, I won't just be able to sit there, confident in the fact that it's Jill and she knows what she's doing. No, instead I'll be in unknown hands, the result of which could exceed my wildest expectations. Or not. Because tomorrow is training day. To be totally honest, I'd rather be in the market for a new doctor because finding someone I trust to cut my hair correctly is not something I take lightly.

Now, before you all jump to the conclusion that I'm kind of dramatic about my hair, let me assure you that, yes, I kind of am. When I was a kid, my hair was stick straight. Then I hit puberty and the curl turned on. It was at that point that I began my lifelong battle with my hair, trying to force it to do things it didn't want to do and be things it wasn't meant to be. My defense for the longest time was keeping it extremely short. I got my hair cut every 3-4 weeks like clockwork. When I first moved to Ames, I went to someone that almost did it right. I put up with it because I really didn't know where else to go. When she moved away, I ended up with Jill. It was a match made in heaven. She knew just how to cut my hard-to-cut curly hair and recently, I've been going as long as 8 weeks between haircuts. Not only that, she was down-to-earth and easy to talk to. The icing on the cake was that we were from the same hometown, so whenever we would meet for my appointment, we would always swap stories of what was going on and who was dating who, etc. etc. Perfect.

Well now she's gone. I e-mailed Jill a couple weeks back asking her to tell me exactly what I need to tell the new person. I'm going there on Jill's recommendation, but I have been spoiled by years of her just knowing what to do. She sent me a description filled with technical terms, which included the highly questionable term "recession line" (she apologized for using it.) Hopefully, Wendy (the new person) will be able to figure it out. I'm a bit nervous because I'm going in at 9AM and I work at noon, so it doesn't give me much time to figure out what to do with it if it comes out terrible. Which it won't. I hope.

I know, I know. It's just hair. That's what I keep telling myself, even though it IS kind of a big deal to me. But more than that, I'm kind of dreading the 30+ minutes of idle chit chat. Finding a new person to cut your hair is a little like dating - if the chemistry is bad, nothing else matters. I'm not interested in all the questions about where I work and what my wife does and how old my child is. It won't be her fault, that's for sure. She'll just be doing her best, which I'm sure will be fine. Jill wouldn't have recommended her if she didn't have full faith in her. She reiterated that confidence in her e-mail.