Winter's Bone was on last night's agenda. It was the last of the Oscar movies we had a prayer of seeing, which would have left us with only Black Swan, The Fighter and 127 Hours unseen (as far as Best Picture nominees go) as we head into next weekend's Oscar show. We bailed and watched last Monday's House instead. Honestly, I think it was a better choice because I'm just not in the mood for depressing movies. Real life, it seems, is depressing enough as it is without actively seeking it out.

The other reason it was a good choice was because it fit into what seems to be an overriding theme of the week. As House gets a bit long in the tooth, the medical mystery of the week is less and less intriguing and I'm more frequently drawn in by the secondary storylines of the episodes. As Heidi pointed out, putting House and Cuddy together really should have ruined the show, but for some reason, it works better than ever. This week's episode was really all about loneliness. The patient, who could inexplicably remember every single memory since puberty had isolated herself due to her inability to forgive anyone for indiscretions. Wilson, still burning from his breakup with Sam, gets a cat rather than jump out into the dating fray again. Taub has failed a pathology certification exam and is sentenced to having Foreman as a tutor, only to realize that, when Foreman extends the offer for him to stay at his place, living by himself in a fleabag motel in the wake of his separation was not the most ideal thing in the world.

A song played at the end of the episode that I had to go and search for the minute the credits rolled. It took a little bit of Googling, but eventually I figured out it was Wilco's "How To Fight Loneliness." I liked it because it was of the indie ilk that seems to always make the unofficial House soundtracks but don't frequently make my own personal soundtracks. I also liked how it could be interpreted in more than one way - the most obvious being that fighting loneliness is all about faking it, putting on a veneer for the world to see while inside you feel exactly the opposite. However, I think the more accurate interpretation (at least for me) is that if you smile all the time, laugh at every joke and fill your heart with smoke, you may actually end up attracting the very things that counter it, bringing more people into your orbit and taking the edge off the lonely feelings that seem to affect many of us, whether we admit to them or not. I think things like Facebook and Twitter, while helping us to connect with each other have, oddly enough, left us feeling more lonely and more out of touch. I can say for myself that there are many times I've thought about taking a week off of both FB and Twitter, just to see how I felt. Maybe I'd focus more on other things? Or would I be pushing away the things that "How to Fight Loneliness" urges you to attract? 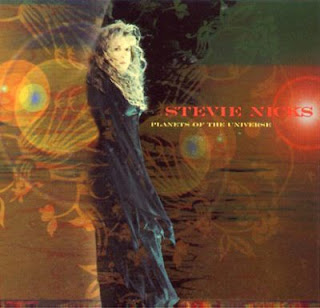 Whatever the answer, I'm not convinced that's entirely right either. Really, the best commentary on this sort of thing comes from Stevie Nicks...like that should surprise anyone. It's another song that has been in heavy rotation recently - "Planets of the Universe." It's one of my favorite Stevie Nicks songs, one that has been around forever but finally found a home on Trouble in Shangri-La. It is angry and biting and, naturally, mostly about Lindsey Buckingham. Not having been in a relationship with LB, it has broader meaning for me. When I am at my loneliest, when it feels like the world has shut off just when I'm wanting interaction and there's just no having it, I take an incredible amount of solace in this song. Because here's what Stevie says:

What it says to me is that we are all just like those planets. Sometimes our orbits cross or approach each other, but in the end, we are all on our own path. The best that we can hope for is to share a sun and that we stay in each other's sight, because ultimately, we have to do it on our own. I think it's really easy to fall into the trap of believing that others will fill that gap that almost everyone feels. Maybe for some, it does. But I think for the vast majority of us, the other people are really like the other planets - in their own orbits. I think the best marriages are made of two people whose orbits intersect but remain their own, bouncing off an energy that encourages them to live their lives while still keeping the other in sight.

In last week's episode of House, House says to the patient who is looking at certain death without a kidney transplant, "it's ok, everyone dies alone anyway." Of course, he stole this from Cher who famously sang "sooner or later, we all sleep alone." I'm not sure if he's right or not, but I don't know if that's the point. I think the best we can do is make peace with it and welcome those that enter our orbits, no matter for how little time it might actually be. I don't think I'm there yet, but maybe someday I will be.

(I double dare anyone to find a blog post that mentions Wilco, Stevie Nicks AND Cher.)

Very interesting...I had never really thought about the meaning behind "Planets of the Universe". This post really hits home how oblivious I am to lyrics.

I really have to give credit to Heidi for finding the meaning in "Planets of the Universe" - this post is a condensation of a lot of conversations we've had.

It is a very angry song, but like I said, the anger is very oddly soothing.