Are you what you are or what?

I found myself thinking of this picture tonight. I blogged it at about this time last year. Every time I look at it, I see myself in the picture (center right), looking melancholy for reasons long since forgotten. Here it is again, just for the nuts of it.

I'm pretty sure I was either a freshman or sophomore in high school - 1986 or 87. My mom is drinking pop out of glass bottle (how I wish we could still do that!!) and it looks like we're all getting ready to open presents. In any event, despite the festivities and the ready made excuse to be happy that Christmas really is, there I am being melancholy. Unnecessarily so.

I am fond of saying that a lot of my teenage years - hell, a lot of my life - has been spent in unnecessary melancholy. Of course, that is not true in the strictest sense. Neither has most of my life been miserable, nor has all the melancholy I have experienced been unnecessary. But I think that there are a lot of times in my life where I sucked the fun right out of a situation for completely no reason. Naturally, this hurt no one more than me.

It has only been in the most recent past that I think I have truly identified the source of the melancholy that has pursued me, as well as the melancholy that I have pursued. So much of my life is spent thinking "what will the neighbors say?" or some reasonable facsimile of that sentiment. Heidi and I were talking about this tonight. I always worry about what I should be doing or what others are expecting me to do rather than taking a good hard look at myself and saying "what the hell do you WANT to do?" I have a great deal of difficulty doing things for myself - and when I do, I deconstruct them to oblivion so as to negate any possible fun that I might have partaking in them. Perhaps that's residual Lutheran guilt - it's okay to have fun as long as you're feeling guilty about having fun. I even second guessed myself on those Dolly Parton tickets - do we have the money? Can we get someone to stay overnight with Anna? - rather than just saying, "no, this is something I want to do and, by God, I'm going to do it."

So which of these Dans am I? I mean, I am a Gemini (and a damn good one at that) so there is bound to be some duality, but one side has to win out eventually. And I think I am tired of the "what will the neighbors say?" side. Long time readers (and long time people in my life) will know that I have been at this point before - but I don't think that I have made the jump, nor have I been quite as ready for the jump - as I am at this very minute.

The lesson to be learned, I think, is that just like in that picture above, the reasons for the melancholy are usually forgotten. No matter how serious they seem at the time, they will dissolve into the past. I can do that now with a lot of things that seemed like the end of the world when I was in college. Either I have forgotten them or can view them from the vantage point of 15 years out and see that really, it was an over reaction.

So anyway, this picture was captured of me just last night - we had Caryle, Jeff and Mary up for a Christmas get-together. I think I like this guy better than the one in the 1986-7 picture. 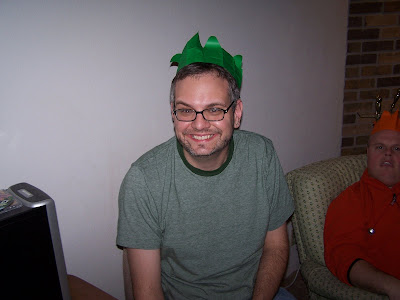 It truly needs to be my new avatar.

And for those that may be growing weary of my serious posts (well, too bad, it's my blog), this will probably be my last one till the New Year (although I still have a few other posts to get out before 2008 - my top songs of the year not the least of them.) I am not a big resolutions guy, but I made a resolution last year that I am very proud to say that I kept. And in damn fine form too if I do say so myself.
Posted by Dan at 12/23/2007 11:08:00 PM

Wow! What an awesome picture of you! It's really great. I know that melancholy, too... been trying to shake it for some time, and also spent a fair amount of time with my shoulders shrugged, thinking it wouldn't change anything if I did. But you know what... I think it would probably make a big difference. For the last several months, I've felt like I'm on the verge of something big and great... just not sure what it is yet. Maybe I'll find it this coming year. Hopefully you can hang onto yours, too!