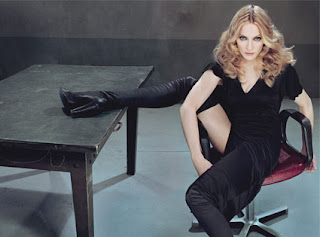 And on the (very) first try! Like there was ever any doubt, but Madonna has been inducted into the Rock & Roll Hall of Fame. It doesn't really matter in the grand scheme of things, but it's still nice to see her getting some props after years of being publicly flogged for just about anything she did.

I am glad for her - but mostly glad she'll be performing at the induction ceremony March 10th. Let's hope she drags out some of the oldies that we haven't heard in a long time (*cough*"Borderline"*cough*) or at least balances it a bit better than some of her one-off performances have been in the recent past. I love the recent stuff, but please - those of us who have been fans for 25 years really do deserve a shot at hearing some of the old stuff again.

Wonder who she'll perform with?