The beauty of the playlist

When Apple introduced Genius playlists a while back, I thought the move was a stroke of, well, genius. I was completely enamored of Genius playlists for a while. But, like most everything else, it was a crush and when the glaring inadequacies of Genius playlists became more and more apparent, I became much less fond of them. I do like how they have a tendency to pull songs out of your library that you have either forgotten about or have not heard in an age. With nearly 20,000 songs in my library (note: not 20,000 unique tracks), that can be a positive thing.

But the problem with Genius playlists is that they are really not all that smart. For example, in response to my brief re-flirtation with 90s club music, I made a Genius playlist based on Corona's "Rhythm of the Night." And while it did manage to pull "Rhythm Is A Dancer", "Another Night", and "Pump Up The Jam", it also rather inexplicably put Annie Lennox's "No More I Love Yous" and Christina Aguilera's "Genie In A Bottle" in the same playlist. Those are two songs that, had I been building the playlist myself, would have never even been considered.

So ultimately, I am much happier putting my own playlists together, even though using Genius is a good way to grab 25 songs on the fly and put them together. One of my favorite playlists to listen to right now was one inspired by the book I am currently reading (and close to finishing) Band Fags. Each chapter is named after a pop song from the 80s, a snippet of the lyrics of said song serving as a brief introduction to the chapter. I had a good 95% of these songs already, so making the playlist was not hard. Here it is, for your perusal. (Click to make bigger.) 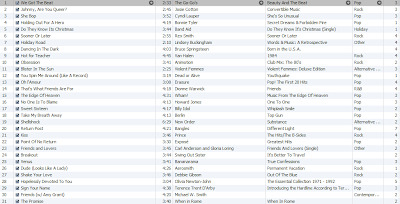 There are a few songs missing. Currently, I am missing OMD's "Secret", Timex Social Club's "Rumors" and a song I had never heard of called "Bless You Boys" (which I think has something to do with this.) I had to buy a handful - including that Rex Smith song which made me twitch a little bit when I bought it ("I can't believe I'm paying 99 cents for this!") but it's amazing how well the songs blend together. Even the Michael W. Smith song which I thought would stick out like a sore thumb fits in well with the rest of the music. (Mary/Heidi, I can still hear old what's-her-name at Fairfield singing that song!)

So I guess the bottom line is, when it comes to playlists, Genius is nice but I'd rather have them on my own terms. Kind of like I like the rest of my music. There's a reason I don't listen to the radio anymore.
Posted by Dan at 2/16/2009 08:47:00 PM

Mary Ellen! Now I have that song stuck in my head!

And Hot For Teacher... Dan you slut!

I know - an eclectic playlist when you have contemporary Christian at one end and lusting after the teacher on the other!