I find your lack of posts disturbing

But Lord Vader, there's a reason for the lack of posts. Actually several. But really, at this point I would have been strangled by the Jedi chokehold, right?

I have been sick for over a week now. Not knock-down, drag-out sick. Not sick enough to miss work. But sick enough to be so fucking annoyed by it I can't even begin to describe it. I wake up every morning feeling pretty good, but it's a downhill spiral from there. About midday, my legs and arms start hurting and by the evening, my eyes are hot as if I have a fever. But, as we all learned from House, tests don't lie and I am not feverish. Last night, I woke up in the middle of the night drenched in sweat. So I'm hoping that I have turned a corner. I mostly just want to feel better and, as Heidi pointed out this morning, my biggest problem is just that I am the most impatient sick person there is. We'll see how tonight goes.

We lost our internet service for approximately 30 hours this week. It was kind of like the night the lights went out in Georgia only without all the murder and lynching and whatnot. A bad modem was to blame - after 5 years, it decided to give up and went to modem heaven. We now have a brand spanking new DSL modem that Qwest expressed to us (for free, no less) and after some initial issues with getting it hooked up, we are all reconnected. Of course, the Macs found the network right away and had no problem. My PC, on the other hand, continued in its tradition of being a gigantic pain in the ass and refused to see the wireless network. I stood on my head and sprinkled pixie dust and moved the wireless antenna a fraction of an inch and suddenly, there it was. The night we were without internet gave us a close approximation of what it must have been like for Ma & Pa Ingalls on the prairie. (btw, if anyone can tell me WHY the lights went out in Georgia that night, I would be forever grateful. It has always been a mystery to me.)

We are all shuffling off to see Coraline in 3D this weekend. I finished the book last night (I was the only one left in the family to read it) and it sounds like it will be worthy. It was scary in parts, but not too scary for Anna. She is over the top excited for the movie. Even though it will be expensive, what a fun family outing it will be.

I did that 25 Random Things meme on my Facebook page, and one of them detailed how I am still a little bit scared of The Exorcist, especially the scene toward the end of the movie during the exorcism when for a few seconds, there is an image of Father Karras' dead mother sitting on the bed bathed in white light. It is not scary (certainly not as scary as Regan turning her head all the way around and cussing at her mother) but it has ALWAYS creeped me out, such that I usually avert my eyes when the scene is coming up. Well, thanks to this isn't happiness, I saw the photo of that scene (see it here, I can't bring myself to put the picture on the blog) quite unprepared to see it. It's like someone sneaking up on you and punching you in the back of the neck. (Heidi, if you saw this picture, you saw the scariest part of the movie.)

And to wash that nasty picture out of my brain, here's a great photo of Madonna that I had forgotten about. How I loved the cowgirl phase. 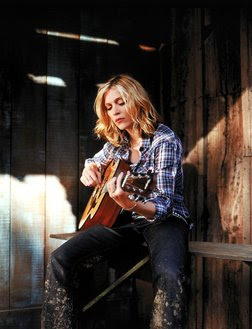 The "lights" is just an analogy for her brother's death.

oh no - sorry to hear you have been annoying ill. that sucks - not to worry about lack of postage, even though my life would suck with out you :) Enjoy Coraline - i can't freaking wait!