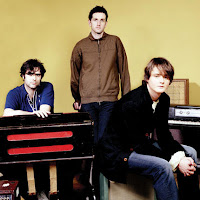 I found out via Facebook tonight that Keane is playing the Myth nightclub in Minneapolis on May 15th. While I'm not a huge and over-the-top Keane fan, I do enjoy their music enough and they probably put on a good live show. The venue looks pretty intimate (even though looking at floor plans it suffers from a lack of seating - or perhaps not, it's hard to tell.)

Still, it's bad timing. We're saving for a trip to Phoenix/L.A. in June and that is really requiring us to pinch pennies. That, combined with the fact that I am bound and determined to keep paying down the credit card rather than adding to it, make even a quick trip up to Minneapolis pretty much out of the question. And I don't even know what tickets will run, although I doubt they will even come close to Sticky & Sweet prices.

It just goes to prove my theory: if I lived in a major metropolitan area (even Minneapolis or Chicago will do), I would be flat broke from going to live shows all the time.

I might sound weird but I never saw the point of going for a 'live music show'. There is no way they are going to sound better than in the record.. plus the crowd.. I remember going to a Bryan Adams concert where everyone was trying to show they were his biggest fan.. Alright alright.. you are a fan and you do know the lyrics.. but can you please let me hear him? I didn't pay to hear you scream! I would rather buy few more CDs or save for a cricket match.

There is an electricity to a live show that cannot be bottled or recreated, which is why I enjoy live music so much. Even a live recording is a shadow of the actual performance.

And yes, crowds can be annoying. I've certainly experienced my share of annoying crowds, but still, it was the electric feel of the live music that made it worth it.

You know I'd go with you if you really wanted to go.