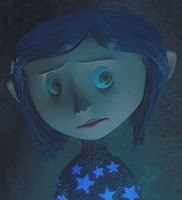 So we managed to make it down to Des Moines yesterday for the 3D presentation of Coraline, and it was very much worth it. We were once again reminded of why first run movies for the three of us are special treats/big splurges and not every day occurrences. We took out $55 for the day prior to leaving. The tickets were $8.50 each (even at matinee prices!), so there's $25.50 and we've just walked in the door. We bought a couple things of candy (they had bulk candy that you could self serve) and a blue raspberry Icee for Anna and that ran another $15-17 (I wasn't there for the food purchases.) So for the three of us to go to the movie, it was the better part of a $50 dollar bill. Outrageous. I don't know how people can afford to do it. Granted, we saw the movie at Jordan Creek Town Center which is the most expensive place in the area to see a movie, but still, it's the principle of the thing.

Anyway, Coraline is really quite good. Overall, I liked the book better but that's not surprising. It's about the best adaptation of that book that we're going to get. My biggest gripe with it was that I thought it took forever to get off the ground, whereas with the book, the first chapter was like a gunshot -- "and, we're off!" But that's a minor point. In the end, it was faithful to the book in the most important places and expanded on the book in places it had to. The best example of that was the introduction of the secondary character Wybe to be a foil for Coraline. Not present in the book, but he became the recipient of the great amount of internal dialogue that Coraline had in the book.

It is actually a little bit scary as well. There was one point at which Anna climbed up on to Heidi's lap and took off her 3D glasses. And before bed last night, she was talking about the things that scared her. And the other mother was very scary as well - reminding me of the Queen Alien at many points (except no one ever said "get away from her, you bitch!") The dog bats, which I thought were going to be very scary, were actually a huge let down - not scary at all!

After the movie, we hung around the mall some, got our MacBook looked at (it has been acting sick) and then went back to Caryle's for supper and laughing at stories we have told a thousand times but never cease to be funny. All in all a good day.

And finally, here's a shot of my "other daughter." Those are the 3D glasses they gave us! I guess the paper ones are so last season. She insisted on wearing them through the mall, giving her the look of a Hollywood starlet trying to evade the paparazzi. But she didn't mind posing for her dad. 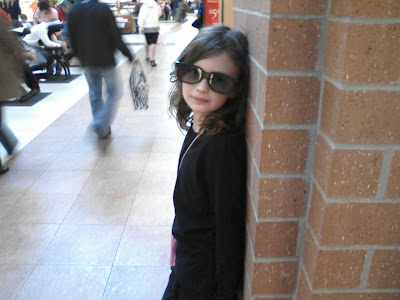 You know those moments in which you get a glimpse of the teenager they will become? As Barbra Streisand said in Yentl, this is one of those moments.
Posted by Dan at 2/08/2009 08:34:00 AM

I love the pic. There's a new indie theater here that charges $12 a pop for movies, but you get free popcorn and pop with it. A bit more reasonable to my mind.

This is why I almost never buy concessions - they're ludicrously priced. My drink yesterday was a very rare exception. The majority of my movie-going involves paying for a regularly priced matinee ticket (apparently the 3D movies cost more) and no trip to the concession stand for munches. If I'm thinking ahead, I'll bring my own bottle of something to drink in my purse. :)

But yeah, good day yesterday; I'm so glad we were able to do it.

I'm with you, Caryle. I usually skip concessions altogether as well. The only exception is at the dollar theater - I can usually be tempted to get a drink there. But even there, a small popcorn is $5! Highway robbery.

When I was a kid, the only treat I ever got the movies was a furry Tic Tac or Certs from the bottom of my mother's purse.

Anna has glamour galore in those glasses. Be sure to tell her I said that!

I will be sure to tell her so - she will eat it up.