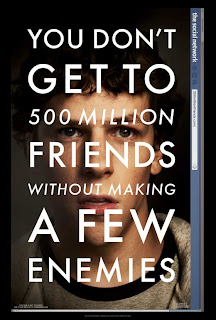 In an attempt to see as many Oscar nominated films as possible this year, Heidi, Caryle and I went out to see The Social Network at the dollar theater. (Jeff was there in spirit - his strep throat is back with a vengeance.) Yes, I know the nominations aren't out till January 25th, but I have a pretty good feeling that The Social Network will make the cut and wind up with one of the ten Best Picture nominations. I had almost seen this movie when I was in Kansas City at the end of October, but the $25 per ticket price tag put the kibosh on that - it was one of those AMC Cinema Suites theaters. Yeah, no dice - are you there to eat or watch the movie?? In the end, I'm glad I only paid a dollar to see it.

Being glad that I only paid a dollar to see it would imply that I didn't like it. On the contrary, the movie was certainly better than most. The screenplay was well written, the acting well done and the story more than engaging. I was always interested in what was going on and was never bored. I like most of David Fincher's movies, including the underrated Zodiac and the much maligned Alien 3 and was really interested in hearing the story of what would one day become the biggest social network in the world. So why, when the movie was over, did I feel so empty? It was like I'd just spent 2 hours watching a story that I enjoyed and was intrigued by, but when the lights came up in the theater, it was the cinematic equivalent of a fast food meal.

What I loved about the movie was its atmosphere - and in hindsight, that's what I love about most of Fincher's movies. I really felt like I was in college with Mark Zuckerberg and Eduardo Saverin. One thing I will say is if that's Harvard, I'm glad I had no part of it. It certainly didn't reflect my college experience socially, academically or any other "ly" you can think of, but it felt very authentic. It was exciting to watch Facebook start out as "The Facebook" (which sounds like something my grandmother might have called it) and morph slowly into what many of us use on a daily basis. The flashback way of telling the story was a smart way to tell the story too, as this effectively spread the drama throughout the movie rather than having a big build up that explodes at the end.

Still, as good as it was, it left me feeling empty. And I think that is probably not the fault of The Social Network or any of the people involved in it. I think that what it really caused problems with it were my expectations of the film and how I watch movies nowadays. I was talking to Heidi after the movie was over and I reiterated my statement that I was glad I only spent a dollar for it. We got to talking and honestly, I am so happy to wait for just about any movie to come to either the dollar theater or DVD prior to seeing it. This feeling would shock the shit out of my 20-year-old self. In fact, if I had known that it was coming out on DVD on Tuesday, I probably would have just skipped it altogether as it required a Herculean effort just to get to the theater.

I was looking back over the movies I've seen in the last year and I don't think that I really and truly enjoyed any that were not at least a little bit campy, leaning hard into the so-bad-it's-good territory. And that's what the dollar theater is all about. It remains the site of the only movie I have actually heard people "boo" at the end of (Silent Hill - it deserved it.) And I think that in the end, what made it hard for me to completely enjoy the movie is that I felt like I "should" like it more. If there's anything that pisses me off pop culture-wise, it's being told what I should or shouldn't like. I can make up my own mind, thanks. And movies like this, that have a 99% fresh rating on Rotten Tomatoes and are universally lauded for their perfection always make me a little bit leery.

Trust me, I don't need splashy effects or car chases to get me involved in a movie (they help, but aren't essential.) But at the end of The Social Network, I didn't really feel like I knew anybody any better than in the first frame of the movie. I also didn't feel like there was a terrible amount of development of the characters either. They pretty much were as they started, just richer.

So I remain conflicted on The Social Network. I think it might deserve a rewatch at home once the DVD is released. I won't mind if it gets the Best Picture Oscar (David Fincher is long overdue - he should have at least been nominated for Zodiac) but I'm only part way through Inception and I already like it better.
Posted by Dan at 1/08/2011 10:45:00 PM