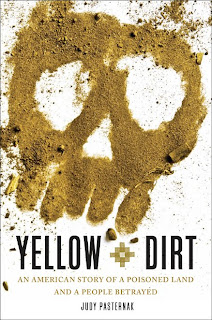 Yellow Dirt was the second book I read while on vacation this January. The first was Torment - a piece of post-apocalyptic zombie fiction, and then this book which tells the story of how we basically raped the land in Navajo Nation of uranium, left the radioactive crap laying around to contaminate everything in sight and are just now getting around to making restitution to the Navajo. Not exactly the feel-good books of the year. But as I always say, the funny thing about feeling is don't always expect it to tickle.

I can't remember how I came across Yellow Dirt, although now that I think about it, it might have been the "people who bought this book also bought..." thing on Amazon. In any event, I was pleased (and surprised) to discover that the library had it. So I trekked down there to get it, along with five other books. It was one of those trips to the library where I got a crapload of books just to see if anything will stick.

Yellow Dirt, as I said, is about uranium mining in the Navajo Nation during the 40s and 50s and the effects it had on the people and the land. We drove through Navajo Nation on our trip west last summer. I have never in my life seen a more desolate and depressing place. In many ways, it resembled the Martian landscape. Considering our nation's treatment of the Native Americans, it's not surprising that we gave them the crappiest land to live on. Granted, it was their homeland from which they were forcibly removed in 1864, only to return to 4 years later. But it was of not much use for farming or anything else and was not desirable real estate until uranium was discovered on the reservation in the 1940s during the race to build the world's first atom bomb.

The book follows one Navajo family through the generations. It specifically talks about a mine known as Monument No. 2, which was a mesa that was almost completely destroyed due to uranium mining. Navajos mined uranium without even the most rudimentary of precautions, despite mounting evidence that exposure to uranium (and all the radioactive elements that it breaks down to) was detrimental to human health. Once the boom of uranium mining started to fade in the 1960s, the mines and uranium mills were mostly abandoned, leaving piles of radioactive waste to contaminate the ground and the water. For a people that depend on the land for a living, the short term monetary gains provided by uranium mining - which the mining companies mostly cheated them out of - were not worth the long term effects on the environment and their health. Cancer, relatively unknown in the Navajo, began to show up in levels several times that in the general population, starting with the miners themselves and then, as waste contaminated the water, the rest of their families.

When I read books like this, I am always amazed at how horribly we've treated our nation's first inhabitants. At the end of the book, I was more convinced than ever that the United States has one hell of a karmic payback headed its way based solely on our treatment of the Native Americans. Yellow Dirt is a riveting account of people deliberately poisoned because no one gave a crap about them. It is also pretty easy to read in that it does not get bogged down in facts and figures. It also ends with some hope, as cleanup efforts are underway.