Kings of the Dead 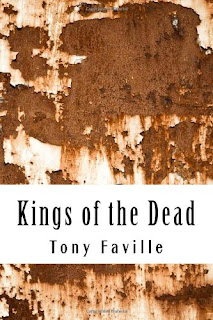 The UU Church we attend has a small group that meets Wednesday nights that, if memory serves, used to be called "The Gospel Group." Looking to revamp itself for the New Year, they rechristened themselves the "Heretics & Spirituality Group." One of the co-leaders is my friend on Facebook and she encouraged me to attend based on my zombie interest as they were going to be discussing zombies and spirituality. Only if you threw in a trashy 90s Eurodance beat could you have something better suited for me. We have two books we're working from right now and one of them is the book I just finished today, Tony Faville's Kings of the Dead.

Kings of the Dead is the story of the zombie apocalypse. Yes, I know. You're thinking "Dan, how many stories of the zombie apocalypse can you possibly read?" My answer to that question is "how high can you count?" The thing is, despite the fact that all the zombie novels and movies tell more or less the same story, it's how they tell it and the specifics that matter. The source of the zombie apocalypse this time around was the H1N1 vaccine. I'll admit that when I stood in line for mine in the fall of 2009, I couldn't help but think "This is how the end of the world in the movie I Am Legend came about! The cancer vaccine turned everyone into zombies!" The use of H1N1 was both effective and timely and clearly Faville is not the only one with that idea as a book called Mad Swine is on my to-be-read list for the year. Most of the normal zombie rules apply. These are reanimated dead people that shamble around slowly. A bite will infect you and they can only be killed with a shot to the head. As everyone knows, that's the cardinal zombie rule - kill the brain, you kill the ghoul.

The story is told in the form of 91 journal entries by a guy named Tony. It was an interesting way to tell the story but was ultimately rather limiting. Apart from a few journal entries made by others in the group, Tony's is the only head we're allowed inside of. And he's not a terribly sympathetic character - at least not initially. Also, the journal entry way of telling the story made it hard to fit in what I lovingly refer to as "hot zombie action." The zombie encounters were necessarily told in the past tense and lacked the immediacy of a third person omniscient that most of the zombie novels I've read up to this point have adopted. I also found that it made it hard to really flesh out the characters. These are people we were supposed to care about but it was hard for me to care about them when I didn't really feel like I knew them that well.

There was also a tremendous amount of time spent on the weaponry used to fight the zombies. Whenever we got to the parts that involved detailed descriptions of weapons that were being plundered, be it from an abandoned military base, a sporting goods store or wherever, I found myself going "blah blah blah blah guns blah grenades blah blah bazooka." That's certainly not the fault of the author. Tony was a gun guy, so it was only natural that he would be interested in and have a great deal of knowledge regarding firearms and other weapons. I just didn't find it that interesting and certainly not essential to my enjoyment of the story. But do remember that this is coming from a guy that has never even held a gun and has a hard time keeping track of who frequently feels like the most clueless person watching a James Bond film.

Kings of the Dead was written as a NaNoWriMo book (hey, I know another book that was written as a NaNoWriMo book that ultimately got published!) and was self-published by Faville, although it has recently been picked up by Permuted Press which is apparently a house that specializes in allowing you to read about the end of the world to your heart's content. Apparently, Faville has taken a lot of heat for being self-published but you know what? This is a changing world and it looks to me like publishing is changing as fast as the music business has and clearly, the old rules of distribution really no longer apply. I applaud him for writing a book and getting it out there, which is more than most of us will do in our lifetime.

Kings of the Dead had a great beginning and end, but the middle was a bit of a struggle for me. I had a hard time staying engaged with the book and I'm not sure I would have finished it had it not been for the Heretics & Spirituality. But to be fair, I might not have even heard of it had it not been for them either. So I guess it's a three-star book for me. A fairly decent entry into the large amounts of zombie fiction that is out there now but not one that I will be rereading. That said, I'd be open to reading another of his books. Recommended for zombie fans only.
Posted by Dan at 1/29/2011 08:35:00 PM