How I Killed Pluto and Why It Had It Coming 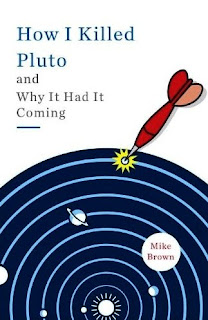 Pluto's 2006 loss of planetary status was not easy for many of us to take. I remember being conflicted by the International Astronomical Union's decision to relegate Pluto to "dwarf planet" status. Reading Mike Brown's How I Killed Pluto and Why It Had It Coming not only sealed it in my mind that Pluto doesn't deserve to be a planet but it was also a hell of a fun read from the man who, had Pluto remained a planet, would have been the discoverer of the tenth planet.

Brown is an astronomer based out of Caltech in Pasadena, California who spent the early part of his career scanning the Kuiper belt - a collection of bodies out past the orbit of Neptune widely believed to be the frozen equivalent of the asteroid belt that exists between the orbits of Mars and Jupiter. In his quest to discover the tenth planet, he and his telescope scanned the whole sky looking for objects 55 times further from the sun than the Earth is. Like looking for the proverbial needle in a haystack, finding a planet involved comparing photos taken on sequential nights and looking for the "thing that moved." As you might imagine, it's no easy task and reminded me that being an astronomer is far more tedious and much less sexy than it might seem. Like being a researcher in any science, you really gotta LOVE it.

Brown eventually discovered not just one but several Kuiper belt objects and, in so doing, turned our popular perception of the Solar System on its ear. His discovery of these Pluto-like objects led the IAU in 2006 to take up the topic of the "definition of a planet." The more he thought about it, the more he felt that none of the KBOs deserved planetary status. He based his argument in an over hundred year old debate when hundreds of newly discovered asteroids in the asteroid belt were being named as planets. Eventually, this nonsense was called off and the asteroids, while named were rightfully removed from the list of planets. In discovering these KBOs and the who-knows-how-many-more there were, the bodies were starting to resemble asteroids rather than planets with discrete orbits. In other words, they didn't deserve to be called planets. There were simply too many of them in the same general vicinity in space.

In the end, I completely agree with this distinction, despite the fact that seeing Pluto go was hard and completely destroyed "Interplanet Janet" on Schoolhouse Rock. And hearing Brown's impassioned endorsement of the IAU's decision when he would have been the only living discoverer of a planet and, therefore, had the most to gain or lose based on the decision, lends an air of credence to the decision. If the man whose discovery was disqualified as a planet based on his own argument isn't qualified to speak on the subject, who is? It ultimately showed that in hard science, there is no room for emotion. Just like there's no crying in baseball, there's no emotion in research science. However, that doesn't translate well to non-scientists, especially when we're talking about things as ingrained as "how many planets are there in the Solar System" and even more so when it looks like we're picking on a puny planet that can't defend itself.

A lot of reviews of this book take issue with Brown's insertion of his personal life in the narrative - he married and had his first child during all this. I would argue that the inclusion of this information only enhanced the story. It's kind of similar to how I look at album reviews. Anyone can write a half-assed review or tell a story, but if you can insert your own life and somehow put a spin on it that no one else can, well then you're a step ahead of the game.

How I Killed Pluto and Why It Had It Coming is an engaging read that is accessible to everyone, not just science heads like me. Like I said at the beginning of the post, he convinced me that Pluto doesn't belong in the planets. Perhaps he can convince you as well.
Posted by Dan at 3/25/2011 06:37:00 AM

Good post, Dan! I read a couple Pluto books last year around this time, and came down pretty much on the same side of the coin you did. Here are my entries on DeGrasse Tyson's THE PLUTO FILES and THE CASE FOR PLUTO.

Pluto will always be a planet in my book.