Your zombies are in my classic literature 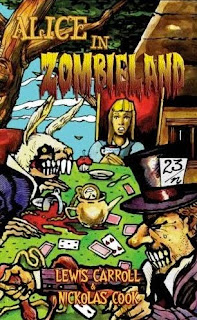 I'm going to say right here and right now that I'm officially DONE with books that take a classic piece of literature and suppose that the simple insertion of hot zombie action will somehow generate something worth reading. I say this after an ill-advised attempt to read Alice in Zombieland. As one reviewer on Amazon put it, Alice in Plagiarism Land would be a more appropriate description.

The funny thing is that this book has pretty much everything that would make for a quick, fun, undead read. It's only 130ish pages, and not only does Alice meet all sorts of undead characters after she follows the Black Rat into a seemingly bottomless grave into zombieland, but Alice herself starts turning into a zombie. You can't go wrong, right?

WRONG. Heidi and I were talking about this and clearly, Alice's Adventures in Wonderland is in the public domain now so rubbish like this can be made without any repercussions. All this book did was take Lewis Carroll's original text and change words. At least Pride & Prejudice & Zombies (which I didn't much care for either) had the decency to write some new parts and change things - i.e. instead of telling Mr. Darcy off after his marriage proposal, Elizabeth Bennet kicks his ass and basically leaves him for dead. This kind of stuff you see in Alice in Zombieland is just plain and simple lazy writing. It's almost a Mad Libs way of writing except I've read Mad Libs that make more sense and are more entertaining than this book.

So I'm doing the e-book equivalent of throwing the book across the room. And I won't ever fall for this genre again - it's going to have to work really hard to make me interested again. This is kind of sad because as someone who consumes pretty much any and all zombie content, I feel like turning my back on it just seems wrong. Plus it'll mean I never get to read this, but it looks like it's by the same publisher that put out the dreck that is Alice in Zombieland, so perhaps it's for the best.

And of course, all this talk about Alice in Zombieland just made me think about Alice in Pornoland which I wanted to link to but didn't because I couldn't find a SFW link. This is still a family friendly blog!
Posted by Dan at 3/06/2011 09:15:00 AM