A couple weeks back, Heidi and Anna were, for reasons known only to them, at Theisen's. Being a kind of a store for farmers, you can imagine it's not a place that we frequent all that often. When they were there, Heidi told Anna stories about how going to Theisen's reminded her of her girlhood. She and her father would go often and she would go look at the one aisle of toys while her father shopped for whatever it was he was looking for. She also talked about Peanut Days - the time during which the store provided free peanuts and you dropped the shells on the floor which in turn oiled the floor. I vaguely recall doing this at some point in my life, but for the life of me, I can't remember where or when. 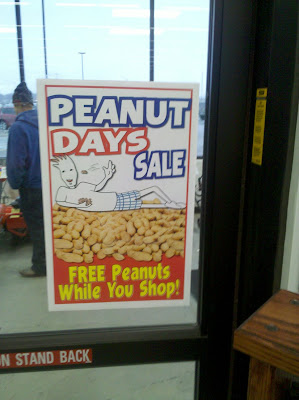 As it turns out, Peanut Days is alive and well. We thought that it was going to be March 1st, so we headed out to Theisen's after work, only to be disappointed by the lack of free peanuts. Apparently, we got bad information and the Peanut Days Sale actually started on March 9th. This was not to be missed.

To be honest, I was expecting more peanut shells on the floor, but as Heidi pointed out is WAS only the first day of Peanut Days which lasts a whole week. I imagine if I trekked out to Theisen's today, we'd find a different situation altogether.

Walking into a store like Theisen's is like taking a trip back in time - at least for people like Heidi and me that have relatively rural backgrounds. In comparison to Heidi, I was a city boy growing up, but this is only because she actually lived on a farm for the first decade of her life, until it was lost in the 1980s farm crisis. I grew up in a town of 10,000 people that had it's own version of Theisen's (S & S Store, now closed) and while I didn't have as agrarian of an upbringing as Heidi did, there were definitely more rural aspects than Anna is getting growing up in a college town. But it doesn't stop her from enjoying this kind of stuff. She can't resist mugging for the camera, which makes getting a candid shot of her all that much more difficult. 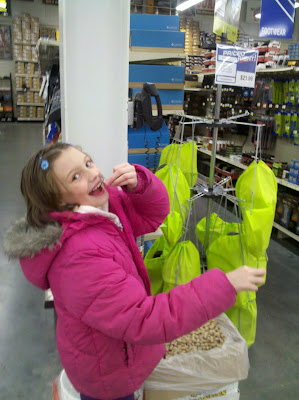 To my great shock, little-Miss-Picky actually liked peanuts out of the shell.

And if you're looking for wildlife printed long underwear, Theisen's is apparently your one-stop long-underwear shop. 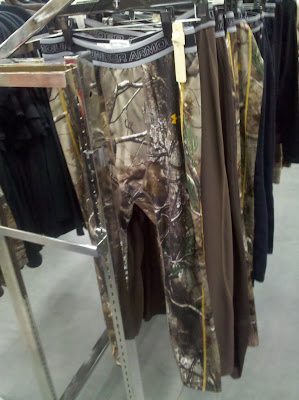