Amidst everything else going on this spring, I'm proud to say that I really am keeping up on my reading. Sadly, I'm not keeping up on blogging my progress. I set myself a private goal of reading 30 books this year and I just finished #14 yesterday. At the rate I'm going, I shouldn't have any trouble hitting that goal by the end of June. We'll see though. So consider this a catch up blog post for three books I just finished reading.

Going Postal / Terry Pratchett
My wife is a huge Pratchett fan. I'm pretty sure she's read everything the man has written and she's been on my case to read Going Postal for quite some time now. And to be honest, I needed something light-hearted. After books like Insignificant Others and Thirteen Reasons Why, I was ready to leave the Debbie Downer books behind and read something funny. Heidi says that Going Postal is not only her favorite Pratchett, it's also her favorite book.

Moist von Lipwig has gone to the gallows for his petty crimes and fraud. But rather than die after his hanging, he ends up being offered a job by Lord Veternari running Ankh-Morpork's post office. The post office had long since been abandoned with the Grand Trunk Company's clacks towers (think: telephone/video chat) taking over all message delivery in Discworld, despite the fact that the towers fail frequently. As it turns out, a shyster like Moist is just the man for the job of Postmaster as Grand Trunk is run by the unscrupulous Reacher Gilt. Shenanigans ensue which result in unlikely triumphs for the post office.

I liked Going Postal quite a bit. I don't love Pratchett as much as Heidi, but I do appreciate his writing. This one was easy to follow and Moist was a fun anti-hero. I also liked the group of men that made up "The Smoking Gnu", former clacks workers that now made it their life's work to hack into the towers. I couldn't help but see Byers, Frohike and Langly from The Lone Gunmen and X-Files fame. Demerits for Death not making an appearance though. 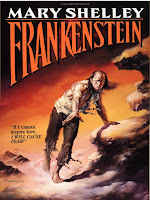 Frankenstein / Mary Shelley
Next up is Mary Shelley's classic tale of gothic horror, Frankenstein. I read this with fellow members of the Heretics & Sprituality group that I belong to at the UU fellowship we attend. It's a good group and we always have great discussions about whatever we happen to be reading. I had read Frankenstein when I was a senior in high school (for fun, no less) and I remembered really liking it. I was also kind of amazed at how accessible it was for being written so long ago. Having been forced to read nearly unreadable classics like Moby Dick and A Tale of Two Cities, it was a pleasure to read something of that era that wasn't so thick you had no hope of ever really getting into it.

The narrative of Frankenstein is both familiar and not-so-much. When comparing the book to the famous Boris Karloff incarnation of the monster, the two stories couldn't be more different. Instead, Frankenstein serves as a cautionary tale as well as weighing in on the nature of being human. Who is more human - the man who gave life to a creature so hideous that he turned his back on it or the monster that just wants, as Queen would say, somebody to love?

And I'll never get over how the monster, that we're so used to hearing speak in grunts, is so damn eloquent in the book. He is one fast learner.

The Q Guide to The Golden Girls / Jim Colucci
I borrowed this book from Jeff when we were all over at his house a few weekends ago for a Golden Girls marathon that inexplicably also included a complete viewing of the movie Supergirl. As you might expect, this is an incredibly easy and enjoyable read, especially for fans of the TV show. And really, if you're not a fan of the TV show 1) what are you doing reading this book and 2) why the hell are you NOT a fan?

My friend Mary famously says that during high school, while everyone else was out on Saturday night getting laid, she was at home watching The Golden Girls. The same thought applies to a lot of my high school career as well, but we both seem to have turned out okay. Let's face it, The Golden Girls is comedy, well, gold. I think I've seen every episode multiple times and yet, we still go back for more. Not many shows hold up that well, although I think Roseanne does a pretty good job for at least the first 75% of the show's run. The Q Guide to The Golden Girls is written from the point of view of The Golden Girls' legion of gay male fans. It tells the story of how the show got started, including the original ideas ("Miami Nice") and the casting of all the lead parts. It devotes a whole chapter as to why so many gay guys gravitate toward that show and another to highlighting episodes that addressed LGBT issues (Lesbian? Lesbian? Lesbian!). It also tells a hilarious story about how at certain New York gay bars during the show's original run, the thump of dance music would stop at 9PM and all eyes would be on The Golden Girls. I love it.

This is a featherweight of a book (not a bad thing) and I skimmed toward the end, but I would recommend it to anyone who really likes the show. It'll take you two and a half minutes to read.

I had no idea Golden Girls had so many gay fans! Interesting!

Death does appear in GP, in the desert withe Anghammarad.