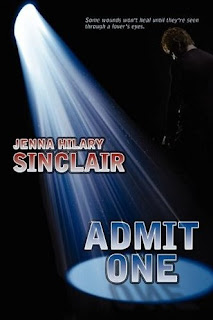 About a year ago, I remember Heidi telling me that I simply HAD to read Admit One by Jenna Hilary Sinclair. She wrote a pretty glowing review of it on Goodreads but for one reason or another, it slipped off my radar. I hadn't read any m/m fiction for awhile, having gotten too busy with my real life to do any kind of proofing for Dreamspinner and when I remembered this book, I thought why not? It turned out to be one of the best m/m books I've ever read.

Tom Smith is a high school history teacher in a small town in west Texas. He is gay but closeted to everyone around him. He chooses to live a largely asexual life, mostly, he feels, out of necessity. His only break from this comes from weekend trips to Dallas where he engages in a series of one-night stands before heading back to his self-inflicted prison. On one of these weekends, he meets Kevin Bannerman who he sleeps with and tosses off like all his other encounters. But unlike his other encounters, he can't seem to forget about Kevin.

Kevin reappears in his life a bit improbably but why not as the parent of one of the cast members in the high school's production of Rent, of which Tom is serving as the assistant director. Feelings rush back but their relationship is complicated not only by the narrow mindedness of the small town in which Tom lives, but also by Tom's own fears. He's afraid to be so much as seen with Kevin in town for fear that their fledgling relationship will be questioned. He is a classic case of "he doth protest too much." And as if that wasn't bad enough, the parents and the surrounding community start complaining about the subject matter of Rent - specifically the drug use and the homosexuality therein.

I think I enjoyed this book so much because the plot lent itself so well to comparison to the plot of Rent. It was cleverly done but not heavy-handedly so which could have been a real temptation that I'm glad Sinclair avoided. As the finale of Rent says, "no day but today." That's something that I think Tom grows to realize over the course of the novel. Sure all the standard plot points are there but Sinclair manages to make them fresh and it helps that I really cared about the characters, rather than wanting to slug them because they were TSTL (too stupid to live.)

The reason I read these books isn't for the sexual content. It's also not just because my wife writes them - although I'll admit that probably is a factor. I've said before in other posts I've done on m/m books that what lures me in is the emotional porn. I'm always there for the relationship - to see how two people wind up together against all odds. I've also said before that referring to it as "emotional porn" tragically oversimplifies it. Sometimes I wish we lived in a world where homosexuality was so accepted and "normal" that two platonic male friends together didn't automatically arouse the suspicion that they must be lovers, and if they aren't, they will be eventually. Men don't really have the freedom to feel truly connected to each other like women do. We feel the need to take every meaningful social interaction we might have and do the equivalent of popping the balloon and making it funny, lest it be misinterpreted. This is done to our detriment. Carefully chosen books like these are one of the few places you can see it, although I suppose the presence of the sex argues against my point. In any event, men in our society are screwed over when it comes to that, especially after marriage. We can't have close female friends because, well that's awkward and what would our wives say and we can't have close male friends because that's been socialized out of us. What's left to do?

Tell the world to screw off, that's what.