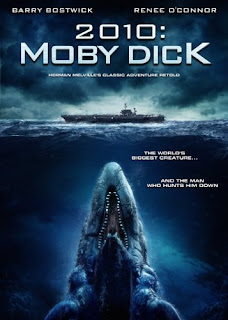 My family hit the sack early tonight and I don't work tomorrow so I decided to stay up and watch a little TV. I had seen that Netflix had added 2010: Moby Dick to the instant line-up a couple weeks back and despite the hideous reviews on the web site and the cheesiness of the trailer, I knew that it was only a matter of time before I watched it. Tonight was the night. I was totally in the mood for an unstoppable 500 foot whale wreaking general havoc.

I have a mixed history with Moby Dick. I have tried to read it several times - twice in high school and twice as an adult - and have failed on every attempt. I have always been intrigued by the story of the white whale Moby Dick and how Captain Ahab relentlessly and insanely pursues him aboard the whaling ship Pequod. I read the plot synopsis on Wikipedia just a little bit ago and it made me think that I needed to give it another try. No frickin' way. The book is held up as a classic but in my mind it is, at best, a slog and at worst, completely unreadable. If I go to my grave not having read that book, I won't care one whit.

That's why I'm so grateful for movies like 2010: Moby Dick. Trust me, it helps to not be romantically attached to the source material. Don't get me wrong, this movie is not good. The special effects are incredibly cheesy, the performances by the C-list cast (save Barry Bostwick who is the only person that I even remotely recognize) forgettable and the dialogue completely throwaway. In many ways, it was kind of a waste of an hour and a half. But for some reason, even though I wouldn't call this movie good, I kind of ended up liking it in spite of myself. As is my common refrain for films like this, it was so much better than any movie named 2010: Moby Dick had any business being. I also realize that's also not saying much.

The movie is surprisingly faithful to the book, only instead of being a 19th century whaling vessel, the Pequod is now a nuclear submarine. The captain is still Ahab, but Ishmael is now Michelle Herman (she even says to her friend prior to the Pequod's arrival "Call me Michelle." UGH), a marine biologist who specializes in "talking to whales." Captain Ahab is still missing a leg thanks to Moby Dick after an attack he attacked the submarine he was on in 1969. Since then, he has hunted the whale without stopping. Moby Dick has been on a global rampage and since the Pequod has been in hot pursuit, the brass at the Navy think that Ahab has gone rogue and is sinking all these ships that have actually run afoul of Moby Dick. From the amount of boats (and even planes!) that Moby Dick has ingested over the years, it's amazing that he hasn't succumbed to heavy metal poisoning. 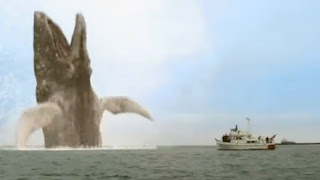 I'm not going to give away much else, although I will note that I was glad to see one of the submarines named Essex (presumably after the whale ship Essex that really WAS rammed by a whale.) Yes, everything about this movie is pure sliced Velveeta and no, it wasn't very good. Moby Dick himself was pretty passable, but even he had moments where his CG was showing. On one hand, I like that CG effects have gotten so cheap that pretty much anyone can do them now, but I also don't like how cheap CG still looks like cheap CG. Granted, sometimes even expensive CG looks bad (see I Am Legend, for example) so I sometimes give movies like this a pass when it comes to that.

For all its faults, this is the kind of movie that we would have watched on Saturday afternoon cable as kids a million times. And for that, even though it wasn't very good, it gets points. Yes it sucks, but in that good way. Cut from the same cloth as last year's Piranha remake only not as scary or bloody, it's brainless entertainment and a fun way to view a complete dirge of a book through the eyes of modern day sci-fi.
Posted by Dan at 4/26/2011 10:50:00 PM