Where the subconscious meets the conscious

I woke up before 7AM this morning and because it was Saturday, I REALLY wanted to go back to sleep. I knew it wouldn't be hard. Anna's old enough now that she just gets up and watches TV or whatever till we get up. Still, I was afraid I wouldn't be able to fall back to sleep so I grabbed my iPod from my bedside table and decided to put something on. Only trouble is, I don't have many playlists that are suited for sleeping. It really doesn't matter - I've gone to sleep with the sound of 90s Eurodance pumping into my ears, but this morning I put on my playlist based on the little known Dolly Parton song "Livin' A Lie" from her film Straight Talk. It plays out like a list of the who's-who-of-90s-female-country (with a couple of exceptions.) You'll have to click on the image to be able to read it. 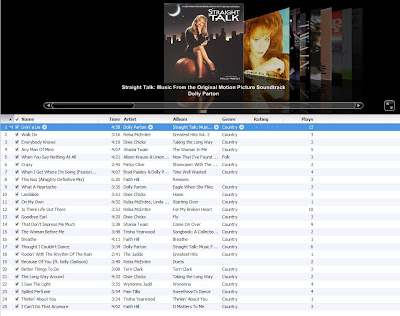 I kinda like how Genius picked the Almighty Definitive dance mix of Faith Hill's "This Kiss" instead of the original.

One of my favorite things to happen when I listen to music as I sleep is when the songs I'm listening to end up in my dreams. This morning was one of those mornings. Here I was listening to this playlist while I slept in the early morning hours and I had this dream that I was a pharmacist at a nursing home and was walking around with a nurse who was making sure that the residents were all in bed. We went in this large circle through the hallways of the facility and as we came around to the front, a little old lady was escaping out the front door. As she ran away, she was singing Shania Twain's "Any Man Of Mine." The juxtaposition of this little old lady and sexy Shania is still kind of cracking me up.

For the record, I really never got into Shania Twain apart from her hits. I was also put off by her overuse of exclamation marks in song titles. If you doubt me, just look at the track listing for her album Up!

I remember several other songs in various dreams I had this morning - I must not have been sleeping very soundly. The Dolly song "Thought I Couldn't Dance" was in a dream where I was driving a car in Carroll and was driving so fast that the car took off and was flying over bumps in the road. Very strange. The subconscious mind can be a very confusing place.
Posted by Dan at 4/23/2011 06:48:00 PM