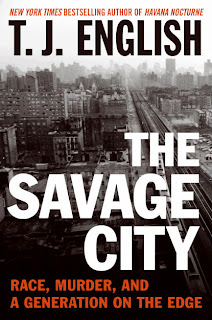 A couple weeks back, Heidi and I were watching The Daily Show and the guest that night was author T.J. English. I had never heard of him and figured it would probably be a forgettable Daily Show interview. But then he and Jon Stewart started talking about his new book and they mentioned New York City in the 1960s. Heidi looked over at me and was amazed that I wasn't already looking it up on the internet. If there was ever a book with my name on it, it's T.J. English's The Savage City.

I consume late 20th century history. I have read so many books on the 70s that you would think there's nothing left for me to read. Yet amazingly, there always seems to be angle or nuance that I hadn't thought of before and I take it in like a starving man at a banquet table. I don't know what it is about that time period that's so interesting to me - I've postulated that it is a time period that I grew up in yet was kind of "unaware of" as well. Regardless of the reason, there seems to be an infinite number of stories to tell.

The Savage City tells the story of New York City between the years of 1963 and 1973. During the time, New York was about as far from the relatively safe tourist destination we know today. This is the New York of Travis Bickle and Taxi Driver. Crime was rampant, race relations were reaching a boiling point, and those who had pledged to serve and protect - the NYPD - were mired in what basically came down to institutionalized corruption. This is a big story to tell, and English smartly chooses to tell it from the vantage point of three different people who lived through the period. These people are:
English very adeptly tells these individual stories as well as not scrimping on details of the larger picture. Familiar events of the time period are mentioned and put in context of the events occurring in NYC, but I also learned a ton by reading this book. I knew virtually nothing about the Black Panther Party and had no idea how the it virtually imploded due to the efforts of the FBI and the CIA, as well as philosophical differences between those on the East coast and West coast.

Despite its length, the book was a pretty quick read. Only rarely did it get mired down in minute details. As I approached the end of the book, I was so invested in the three characters we had gotten to know over the course of 400 pages. English writes in a highly readable style and I enjoyed it so much that I want to pick up his book about the Mafia in Cuba, Havana Nocturne.

The Savage City tells a story of a New York City that has pretty much disappeared. However, I couldn't help but wonder how much of it is still there, hidden by a cleaned-up Times Square.
Posted by Dan at 4/13/2011 06:45:00 AM