Any old music will do 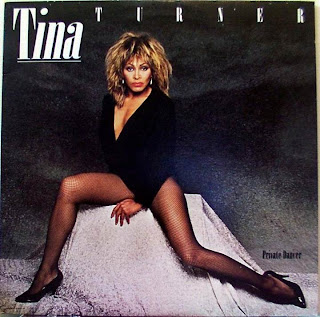 I blew the virtual dust off of Tina Turner's 1984 comeback album Private Dancer this week. Private Dancer was the first of three albums Tina released in the 80s that I really love - the others being Break Every Rule - my sentimental favorite of the three - and Foreign Affair, which is noticeably inferior but still contains some kick-ass songs. What blew me away listening to to the album almost 30 (!) years is how on this album, they really captured lightning in a bottle. Bucking the trend at the time - and now, for that matter - that women over 40 couldn't have a chart hit, Turner knocked everyone's socks off and then some.

Private Dancer came into my life in much the same way it might have come into many people's lives in the mid 80s - via the Columbia House Record Club. Who in their right mind could resist 12 albums for one lousy penny? It was not one of our initial 12 albums. Rather, we were well into the bait-and-switch portion of the agreement, where you pay twice as much for an album than you would at the store. And who could forget all the selections-of-the-month that you would get that you didn't want because you forgot to return the card declining it? I recall a MAD Magazine article that referred to them as slightly more difficult to get out of than an Iranian jail. I think I was still a member of some form of Columbia House or BMG club well into the 90s. The other notable thing about Private Dancer is that it arrived from Columbia House in the same shipment as Madonna's debut album. Yes, Virginia, there was a time I didn't own everything that woman had produced.

Tina's gravelly voice is not for everybody, but it really did it for me. I didn't care much for "What's Love Got To Do With It" and Tina's mountain of hair. But in the summer of 86 I really dove into the pop music pool, and at the end of that summer, Tina put out her first single from the Break Every Rule album, "Typical Male," and I was very fond of that song. So retroactively, I ordered Private Dancer. Turner's voice is so well suited for the material. The amazing thing about the album is that it is a pop album that is also an R&B album AND a rock album. Turner was not about to be confined by genre. The album was a huge smash hit and spun off a shitload of singles and also fueled other Tina songs on other people's albums and soundtracks.

The song I love most on Private Dancer is "I Might Have Been Queen" - one of the few that was not a single. It's a perfect amalgam of pop and rock and I was glad when it was resurrected for the Tina Turner biopic What's Love Got To Do With It.

Like Stevie Nicks' "Stand Back" it has this energy that comes out of nowhere and just propels the song forward.

The last Tina Turner album I bought was the soundtrack to the previously mentioned What's Love Got To Do With It which featured re-recordings of the old Ike & Tina hits as well as a few new songs. After that, I really kind of tuned out. Even her attempt to Believe herself a la Cher really didn't interest me all that much, although I liked the single "When The Heartache Is Over." I admire the fact that Tina is still out there performing, even though she likely doesn't have to. But for me, I'm happy to remember Tina from the 10 year period in which I really enjoyed her music.

The mention of MAD Magazine made me think of this Tina related item from MAD. I believe the title of the article was "Badly Needed Warning Labels For Rock Albums."