Well, it's 6:22PM here in Iowa and the snow is coming down pretty hard - harder than I expected to be quite honest, but not has hard as I've seen it in storms past. And it looks like there's a lot more to come. It's coming from the southwest - mostly west, a little bit south. And it's the fine powdery snow that is shit for building snowmen but is easier to shovel than the wet heavy Missouri snow that we seemed to get all the time when we lived in southeast Iowa.

There's something about a snowstorm that is oddly comforting - and this is only a snowstorm in the loosest sense of the word. I often think about people in the 1850s, living on the frontier in cabins a la Laura Ingalls and how a snowstorm must have seemed magical because it came from nowhere. There was no Super Doppler radar to warn them of the impending snow and there was no central heating and no electricity to keep them warm. It must have just been amazing. And yes, it's still amazing today, although the fact that we've known it's been coming all week takes a bit of the mystery out of it.

Severe winter weather is some of my favorite weather because it's so silently deadly. And so beautifully deadly. That probably seems a bit morbid, no? But it's true. Snowstorms lack the drama of a tornado or a hurricane, but they're more subtle in their severity.

Here's a picture from just before sunset tonight - same vantage point as before (or damn close anyway.) 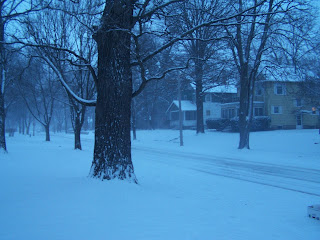