Step back in time, part deux

Posting old pictures may become a weekly thing, it's hard telling. My blogging tends to be rather sporadic - and I certainly don't do it when I don't feel like it.

Anyway, here's the very first picture of Heidi and me that was ever taken. It sits on my desk to this day - exactly why, I'm not entirely certain because there are certainly better pictures of us that I could choose to have displayed. But this one stays - at least for now. It was taken at a buffet restaurant that I can't remember the name of now (Heidi, help!) It's Old Chicago in Iowa City now, but I'm totally blanking on its previous name. Anyway, it was her grandfather's birthday so it's likely early late January/early February. (11 years ago almost to the day! And I didn't even plan it that way!) 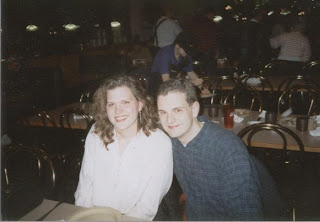 shakey's...old chicago....you live in IC long enough you will be poisoned buy that place...the thoughts of brian callahan

Awwww! You two are SO cute in that picture. :)

And no, I'm not procrastinating at work, why do you ask?