My grandfather, Monroe Newcomb, passed away yesterday morning at 5:20AM. My mom called me last night to let me know. He slipped away in peace - finally free of the pain that had come to characterize so much of his life recently. The funeral is going to be on Saturday so we'll be heading up for that.

As I've talked about before, my grandfather had been in declining health over the last year. Recently, he'd gone on hospice care and the primary focus was keeping him comfortable. The last time I saw him was just before Christmas this year - a Christmas I almost didn't go to because of the general busy-ness of the season. Now, I am so incredibly glad that I went. Although my grandpa was kind of out of it and it took him a few minutes to figure out who I was, ultimately, he knew who I was ("oh, you're Nina's boy!") and I saw a side of him that I had never seen before. He talked to me about the pain that he was in - saying that there had to be something they could do. I had been talking with the nurses earlier that day who had been talking to my grandma and they'd finally decided to put him on Roxanol (oral, concentrated liquid morphine) to help with his pain. I was able to tell him that his doctor had prescribed something that was going to help with the pain - and help quickly. Hopefully the doctors didn't make a liar out of me.

In the long run, it's never how someone was at the end of their life that persists. In the case of my grandfather, there was 89 years prior to his death to remember. And what a life it was. He raised 6 children. He farmed a large amount of land (I can't remember the exact amount) during the 80s farm crisis which was no small feat for a lot of farmers. He lived with significant hearing loss most of his life - a huge memory of my grandpa will always be how you had to talk louder than normal for him to hear you. And then there's the legacy of 60+ years of marriage to the same woman, something that I hope like hell I can repeat. That is, if I live that long!

And then there are the fun memories. The memories of sleeping in sleeping bags all over the house at Christmas, only to hear him coming in the door with snowballs to put in our sleeping bags. Sitting in their motor home at Adventureland Park (an amusement park to which he provided us free tickets year after year) and as I ask my grandfather a question - he proceeds to burp in my face. And then there's the memory of being 17 years old, at my grandparents house for Christmas and getting sick. And I don't mean just "oh, I've got a cold" sick - it's was the chills, aches, throwing up sick. It's 5 in the morning and there's one bathroom in the whole house, and the door is shut. I am so nauseated that I don't care who is in there, and I throw the door open, only to find my grandfather sitting on the toilet as I'm sick in the sink saying "Are ya hurling?"

My grandfather was not one that expressed love to us explicitly - I think that has something to do with being a man in that generation. I don't remember ever hearing the words "I love you" coming out of his mouth - at least to me. But there was never any doubt in my mind that he loved us. We were the continuation of his family - all of us. And family was so obviously important to him. There are things he did for his family that, when I think about it, must have been so hard for him.

And the things he witnessed - the changes. Sometimes I think that it's no wonder that death must come as a relief to so many of the elderly these days as they've seen so much change in their life that the world they are growing old in bears absolutely no resemblance to the world in which they started their lives. I sometimes wonder if I'll see that much change in my life.

So here's to my grandpa, who is finally out of pain. I'm very glad that he didn't linger for months and months, in pain and confused. But I am still saddened by the news of his passing.

Grandpa, I hope that heaven is a symphony of music that for so much of your life, you had a hard time hearing. You are an inspiration - and I will carry you with me my entire life. 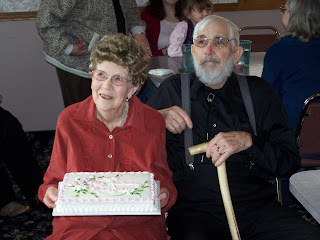 Hugs for you, Dan. My thoughts are with you.

aw Dan, i'm so sorry for your loss. Your grandparents looked at utterly adorable couple. May he be at peace now. And ditto what Caryle said...

That's a sweet photo. I'm sorry for your family, and your grandma especially after seeing the picture. I hope the funeral goes well - they can actually be quite nice.

The odd thing, though, is that you often learn something at the funeral that you then want to go ask the person (who has died) all about and of course you cannot.