Zbornak on Amtrak...among other things

Well, it was a long time in coming but it was actually a decent night at work tonight. Not too busy, but not so dead either that the night seemed endless. So it was a good thing.

On the way to and from work tonight, I listened to Laura Nyro's Eli and the Thirte 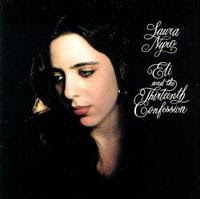 enth Confession which is an album I bought off of iTunes the other night. I have known about this CD for probably 10+ years now and I just never got around to actually listening to it. I was taking a bit of a chance with it because a little Laura Nyro has a tendency to go an incredibly long way, but the album is a classic album of the late 60s so it's pretty much required listening for me. The songs that leaped right out at me were, of course, the songs that I knew previously as they were covered by the 5th Dimension -- "Sweet Blindness" and "Stoned Soul Picnic." I laugh whenever I listen to "Stoned Soul Picnic" as there's a line in the song that goes "there'll be trains of trust/trains of the golden dust" and when I was a wee lad (ok, 14 so maybe not so wee of a lad) I could have SWORN that they were saying "trains of trust/trains of the Golden Girls" even though I knew there was no way in hell that was right.

When I listen to it, I feel like I'm missing out on a huge part of the listening experience by listening to it in digital clarity. Reading some of the reviews on iTunes, it sounds like people wore out multiple copies of the vinyl - and it seems like listening to it on vinyl with all the cracks and skips would be essential for a true Laura Nyro listening experience. I also think it would be helpful to be doing drugs of some sort - probably marijuana, but since that's simply not going to happen, I'll just have to pretend.

It is a good album. I'm just familiarizing myself with it now, and I'm sure that my opinion is still a bit in flux. I do like the images I get in my head when I listen to it - but then I'm a sucker for late 60's/early 70's stuff anyway.

One problem I have with it is that it was featured quite prominently in a book that I really loved up until the end - at which point I chucked the book across the room and vowed to never read anything by that author again. The book was A Home at the End of the World by Michael Cunningham. The book had so much potential and had me all wrapped up in the characters only to have an ending so completely inconsistent with what any of the characters would do that I just simply couldn't stand it. I HATED how they ended it. Without spoiling it for anyone reading that might be inclined to read it, I just couldn't believe the reactions that the two main protaganists had to what happened at the end of the novel. As a father, it was insulting. Enough about that.

OOH Laura! Love her too! My favorite song by her is Wedding Bell Blues, but I also love I Never Meant To Hurt You. Think Streisand's version of Stoney End is the best!