Blame it on my wild heart

One of the fringe benefits of Pride yesterday was that I got to stop at ZZZ Records in downtown Des Moines. It's not really the kind of record store I would normally stop in (Borderline Music in Chicago is much more in line with my musical tastes), but they have an enormous selection of used vinyl. I'm not sure that I've ever actually purchased any vinyl there, but usually when we are down in the East Village, I feel the need to stop there. This time, I found a treasure. 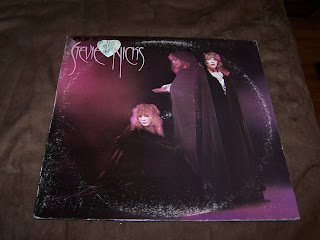 It is Stevie Nicks' second solo album The Wild Heart. When I was a fledgling Stevie fan, this was my favorite of her solo albums. I probably can't say that now, although it will always have a special place in my heart as a member of the "first 3 solo Stevie Nicks albums." I love the cover art on this one, and even though this one is probably only in fair to good condition (as evidenced by the fact that you can practically see the record through the album cover!), it was still better than the other copy of The Wild Heart that they had. It had a "FOR PROMOTIONAL USE ONLY" sticker across it. Needless to say, that POS stayed right where it was. Also, they had a copy of Bella Donna, but someone had written their initials right across Stevie's shoulder! Yeah, didn't pick that one up either, although it is the only one of Stevie's first three albums that I need to find on vinyl.

So because of this find, I have been listening to The Wild Heart a damn lot. I actually fell asleep on the bed listening to it this afternoon - although it is a bit of a backhanded compliment to say that something was so good you fell asleep listening to it. But it reminded me of many days after school in my room listening to Stevie on cassette tape, when all that there was for her solo stuff was Bella Donna, The Wild Heart, and Rock A Little. Those were simpler times, my friends!
Posted by Dan at 10/06/2008 09:20:00 PM

Score! Nice find there, Dan. And what? Stevie has more than 3 solo albums??? :P

Someone told me about this live performance that Stevie did for PBS earlier this year, and said she looked amazing. Someone's aging much better than Mr Buckingham, methinks. And as a kid, I LOVED Edge of Seventeen...so dramatic. Stevie was always on the periphery of my teens.

Yuri - she actually has only 4 good ones! Street Angel and Other Side of the Mirror are ones I could live without! (although each has a good song or two on them.)

John - that PBS Soundstage was great! Did you see her performance of Dave Matthews' "Crash Into Me" It is fantastic. The thing that I have always loved about Stevie is the drama, and there is certainly no shortage of that in her life.