I'm a bit late in getting this posted, but October 11th marked our 11th anniversary. Yes, it was 11 years ago yesterday that we said the I dos and in sickness and in health and till death do us part. *cue the crashing glass* (all you Madge freaks better get that reference or else!)

Last year at this time, we were in sunny Phoenix visiting my brother and Heidi was getting an implant and Anna had pneumonia and we didn't even know it. This year, we went north (Miss Tessmacher) to Minneapolis to see The Magnetic Fields in concert who, despite me knowing only a couple of their songs, managed to keep me fully engaged for the entire evening. The concert was very different from the one I will be seeing in a mere two weeks' time. It felt very much like we had been invited into their living room to listen to them play a few songs. And not a single member of the band emerged on stage from a gigantic disco ball.

We always tell the story that when were deciding on a wedding date, we picked October because we wanted a nice cool fall day for our wedding. That is what we wanted, but it was decidedly NOT what we got. October 11, 1997 was very VERY warm for October, with mid-80s for highs. Despite that, we made it through.

We have a lot of good memories from that day even though we did not get the cool crisp weather we were hoping for. The one thing we would do differently if we had it all to do over again is we would spend a lot less on the wedding and a hell of a lot more on the party because frankly, that was the fun part. This makes it sound like I have big regrets about our wedding reception, but believe me, nothing could be further from the truth.

We had our wedding reception of the Swisher American Legion in Swisher, IA which is a small town north of Iowa City. Why the Legion? The honest answer is that the price was right. After looking at hotels and other places for the reception, we decided that we simply could not afford the cost of renting out one of those places. And in the end, it was the Swisher American Legion that served our purposes best.

And so it came to pass that it was the site of the wedding party. I famously DJ'd my own wedding dance (and I did a fabulous job too, as you might expect even though I was severely handicapped by the fact that this was before burned CDs even, let alone MP3s), consumed an entire bottle of wine on my own and we all vogued with the best of them. Ultimately, it was very us. So no, no regrets.

In the Swisher American Legion hall, there was a gigantic flag hanging on the wall. We never covered it or moved it or anything like that, but our photographer did snap one picture of us in front of it, since it seemed to be the chaperone of the dance, so to speak. When it came time to make the parent wedding albums, everybody we showed this picture to wanted a copy of it for theirs. 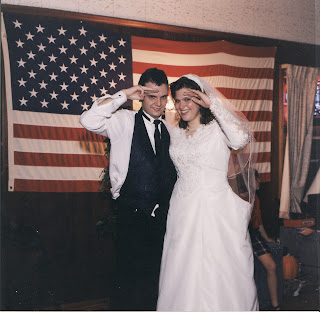 PS Yesterday was also National Coming Out Day, which always coincides with our anniversary. To those choosing to take those steps out of the closet on that day, we salute you. Your bravery to be honestly who you are is an inspiration to us all to live more in line with who we really are, rather than what we think we should be (or worse, what others expect us to be.) My hat is off to you.
Posted by Dan at 10/12/2008 01:10:00 AM

Aw, i love this story.

What a great post! Takes me back to our ceremony three years ago. We didn't have a dance floor (we went cheap and did a lunch reception at Maggiano's that was really affordable), but the time spent with family and friends made it all worthwhile. Congrats to you both!

Happy Anniversary! Here's to many more years together! You have already surpassed the two I gave your marriage way back then.

Great picture. I hope there was a song playing in the background with the lyric, "We'll put a boot in your ass!"

Thanks for all the good comments!

And as for the song playing in the background when this photo was taken, it was probably either "Vogue", Diana Ross' version of "I Will Survive" or "Bad Girls." I can't remember which. ;)

That picture is incredible, thank you for sharing it and, more importantly, happy 11th anniversary :)

Happy anniversary! 11 years is amazing :) I only hope darren and i are as happy as you two seem for our 11 years (which - oh god is only 18months away!)

and how nice that national coming out day coincided. I know how passionate you both are about gay rights and love you for it.