So prosaic and awkward and all

I have really managed to immerse myself in a lot of Keane this last week or so. This is kind of weird for me because, really, I have always only had a passing interest in Keane. I never gave their debut album a fair shake and then heard nothing but awfulness about the follow-up Under The Iron Sea. In fact, just recently, my sister and I were discussing albums that failed to live up to their album art. Under The Iron Sea probably falls into that category for a lot of Keane fans - a mediocre at best album with kick-ass album art. I mean, look at this! 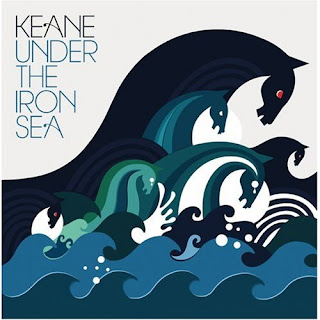 Oddly enough, while discussing that we mentioned that Hard Candy totally lived up to its incredibly shiteous album art. Jeff was here last night and reminded me of how she looks like she has the flu in every single shot in the CD booklet. But I digress.

So it's been a Keane kind of week, and when you factor in all the Will Young I've been listening to, it's Brit-pop or bust, I guess. Anyway, even though Under The Iron Sea is not a fan favorite, it contains what is perhaps my favorite of all Keane songs. And that would be "Leaving So Soon?" It is an angry break-up song that is high on the drama (but not too high.) I owe my exposure to this song to a friend of mine who told me in an e-mail about a year ago how the song had applied to his life. But in that e-mail, he mentioned that they lyrics were "very Dan." This intrigued me. He particularly mentioned this part.

That's the thing about introverts. Still waters run deep. And then add the Gemini into the mix and it gets even more interesting. Really though, they had me with the fact that they managed to successfully work the word "prosaic" into the lyrics!

I think what I love most about Keane is Tom Chaplin's soaring vocal and the distinct lack of guitar. Instead of the guitar, the piano is their dominant instrument. So I guess none of their songs will ever end up on Guitar Hero (like they had a chance anyway.) Other worthy Keane songs I am totally into right now are "Bend & Break" (talk about a soaring vocal!) and the one everyone loves--"Everybody's Changing", both from the debut album.

Although I'm a pretty big fan of Keane, "Under the Sea" was just 'okay', but there was a standout track for me: Atlantic. I don't know if it's because I saw the video before the album was released or not. Considering that I watch very few (if any) videos of anything in recent years, this was unusual. And, I was really captivated by the visual impression of the sound of that song--so very dark--not the lighting, but the tone. Brilliant little piece of film art. Have you seen it?

I am in the minority on this one, but I LOVED "Under the Iron Sea". "Nothing In My Way" is my kind of song, and the Tall Paul remix of "Is It Any Wonder" only enhanced the experience. But yes...Keane=fall. And fall is going to be a great time for me. This much I know.