We went to Center Grove Orchard yesterday after I got off work. This is the bread and butter season for places like that, and honestly, it's one of the better ones I have been to. We went there two years ago when Anna was in preschool, but they have significantly expanded since then, adding on a whole bunch of kid friendly attractions.

One of these attractions was what they called the "corn pool" - an area surrounded by haystacks filled with dried corn kernels. I guess it is the agricultural equivalent of the ball pool that you see at Chuck E. Cheese or whatever. Heidi tells a story about how she was not allowed into one of those ball pools on account of being tall-for-her-age. Serious trauma that is not likely to be repeated in our tall-for-her-age daughter. In any event, Anna thought it was awesome. She loved trying to bury herself in corn. Naturally, this led to her wanting to bury me in the corn - something that I was not all that keen on. But then I thought "What the hell? How much longer is she going to want to do that?" so I did it. 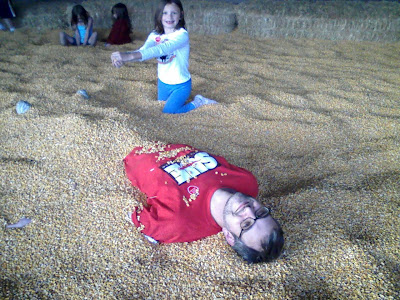