What have you done today to make you feel proud? 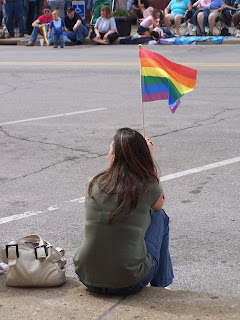 This last weekend was Capital City Pride - delayed by the deluge from this June. I was not sure how Pride would play in autumn, but surprisingly, it was great fun, probably even more so than in the summer. A lot of that had to do with the fact that it was not 95 degrees and more humid than Dagobah, although it was still quite warm for October! Pride is always such a fun event, Anna really gets into it and the atmosphere is just so...well, it's hard to describe because while it's inclusive and celebratory, it is also very Midwestern.

Anna and Heidi rode on the One Iowa float. One Iowa, for those that don't know, is the group that is working their tails off for marriage equality here in Iowa. It still strikes me as odd that Iowa would be on the front lines of gay marriage, but then again, Iowans are pretty practical people so it really shouldn't come as a surprise. This was Anna's first time on a float and she hurled candy with the best of them. She even made sure that she threw a box of Dots my way (one of the small ones, not the big ones you get at movie theaters!)

One of the big highlights of Pride this year was Michelle Knight who is one of Iowa's premiere Cher impersonators. I have to wonder how much competition she has, but still, that is one dead ringer for Cher. Here she is riding in the parade, with "Believe" pumping out of the car. Even though the style (faux metal 80s leather Cher) and the song (late 90s dance diva Cher) were at odds, it still worked. 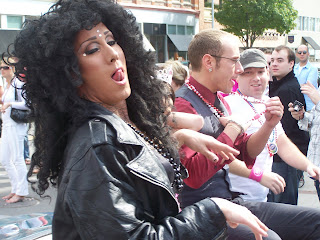 Of course, Anna HAD to meet Cher. We even got a picture! 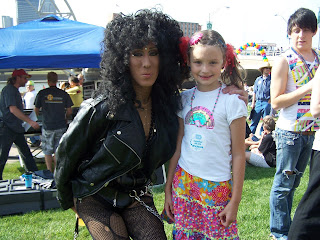 The thing I love about Pride year after year (this is my third, Heidi and Anna's fourth) is that even though it is primarily the same thing each year, it is something that is so incredibly important to me. Supporting the gay community is something that I cannot feel more strongly about. I have long since forgotten why I got involved in LGBT rights issues, but there is no better way to get me riled up than to be idiotically homophobic. Part of it is that I have found a kinship among the gay community that has eluded me most of my life, but mostly, it is because I cannot stand to see basic rights that I take for granted being denied to people that I count as family.

Some would argue that I am using my daughter as a political pawn, not all that dissimilar to that moment in the Dixie Chicks movie where the little girl says "The Dixie Chicks suck!" But I can't imagine raising her any other way. Ultimately, if I'm wrong, I'll have to answer for it, but for now, I make the best decisions I can. And besides, she just likes to dress up like this. 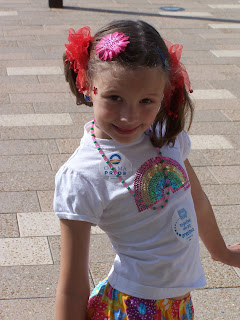 I have no idea how much longer she'll want to do that, so I savor every year that she does it.

As my parting shot, here's Michelle Knight as Cher doing "If I Could Turn Back Time." I felt bad for her because she hardly got to do her routine, so many people were giving money! I doubt she had a problem with that though!

Aw thats adorable - Anna's comment about Cher, and Cher hiding the beer :) Sounds like a fun day! I've seen a lot of impersonators who take that icon leather rock look for whatever stage of Cher's career they are covering. Perhaps it's because people most identify with that look? Talking of Cher, I dug out my Love Hurts album today after reading this post. I forgot how obsessed I was with that in the early 90s...

Anna's comment is priceless! I'm glad you guys had a good time and that there was "no more rain" this go round.

Dan - the way you are bringing up Anna is wonderful - to be so open-minded and compassionate. Such rare things it seems these days in modern America. Looks like you had a wonderful day.

I'm with p.viktor; it's inspiring how beautifully you guys are raising your daughter. If only half the people in the world were as special as your family, the world would be a better place.