As I hinted in my previous post (and kudos to everyone who has participated!), I have not really accomplished anything of any real significance today. Even though tomorrow is Friday, it is really Monday as it begins a 5 day stretch of work. I'm working kind of crappy shifts but I traded into the evening shift over the weekend because of a previous commitment so I really have no one to blame but myself.

I got a Best Buy gift card from Heidi's grandparents for Christmas this year. Anymore, there is so little at Best Buy that I want that I'd almost rather have a Borders card, but beggars can't be choosers. So a while back, I bought an iTunes card with it and have been slowly whittling away at it. I always like to use those to buy a song here and a song there rather than whole albums. So far, I've bought 4 songs: "Ride The Ride" by The Bangles, "Freedom Dance (Get Free!)" by Vanessa Williams (*hangs head in shame*), "Nick of Time" by Bonnie Raitt and "Quiet Evening" by Carly Simon. It's just like buying 45s!

We're reading Beezus and Ramona to Anna at night. She's almost to the point where her attention span can handle chapter books. In any event, I was SHOCKED to find out that Beverly Cleary is still living. She's 91 and still kicking.

I have not broken the news on this blog (although Heidi has on hers) but come February 4th, we are entering the 21st century and getting DirectTV, complete with 100 hours of DVR. 200 channels, nothing but cats. Actually, 200 channels and there STILL won't be anything on. But the best part is because it's bundled in with our long distance and internet, WE AREN'T PAYING ANY EXTRA! We are excited though because there are so many things that I just don't get because I don't watch cable. It's part of why I let my EW subscription lapse - I got so sick and tired of it always being about TV!

Backwoods Barbie is coming out on February 26th, a mere two days before Heidi and I head to Minneapolis to see Dolly Parton. This is the album cover: 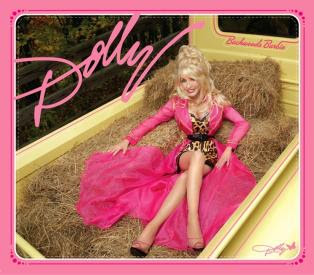 I'm not sure what to think. I do know that she covers the Fine Young Cannibals' "She Drives Me Crazy." It seems like a bad idea on paper, but so did her cover of "Stairway to Heaven" and that turned out quite fine and dandy.

It is fucking cold out tonight. And that's all I have to say on that subject. My folks are in Vegas and I bet they are glad for it.

Sicko is coming from Netflix tomorrow. Not that I'll have time to sit down and watch it till next Wednesday, but we'll see how it goes. I'll admit that I have shied away from it as I have had trouble with a lot of the sensational news and political stories these days (don't even get me started on the election!) but Matt watched it last week and was wondering what my reaction to it was as a health care person. I had to admit that I hadn't watched it, so I rescued it from Netflix-queue-hell.

I <3 the Ramona books so much! Is Beezus and Ramona the one where they get their hair cut? I'm so excited Anna is enjoying them. They're some of my favorites. Come to think of it, my mom would be happy to hear that, too. :)

Yep, seriously! I think that "Backwoods Barbie" is actually one of the songs that Dolly has written for the 9 to 5 musical.

I used to love the Cleary books - it must be fun to have an excuse to read them now.

I would not worry about accomplishing much - you just remodeled a room!