Ambition of the blond (and the non-blond)

I'm sitting here in my fantastic looking new TV room listening to one of several bootlegs of the Blond Ambition Tour on my iPod while Heidi gets Anna settled in bed. The one I'm listening to is the one from Dallas. I have absolutely no idea how they got this near-soundboard recording of the tour. It must have been simulcast on the radio or something because there's no way on God's green earth it's an audience recording. Anyway, I really like this recording of the tour. Her voice was not completely shot yet, and it lacks the "dress rehearsal" feel of the audio from Yokohama. So it's a bit of a happy medium.

Now, if I really wanted to punish myself, I would listen to the Barcelona Blond Ambition where she sounds absolutely awful. There is no apologizing for that vocal performance, it just scraped the bottom of the barrel. Granted it was toward the end of the tour, so there's that. It is sometimes fun to listen to because it's clearly in an outside arena and Madonna complains about the heat all the way through the show.

Anyway, so today was a good one. We got our room done (for the most part) which is a major accomplishment for something that we didn't even set out to do until January 2nd. Heidi already blogged it, but here's a few pictures of what we did (for those of you that don't read both of us.) 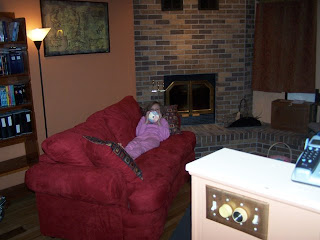 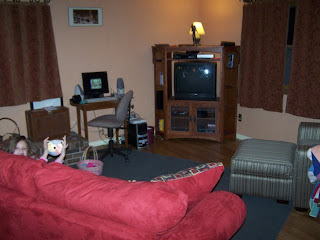 That Anna, she's such a ham.

It feels good. I'll admit, I wasn't sure the red couch would work, even as I was plunking down the money for it, but I do believe it works. It's so nice to have a room that we actually enjoy rather than one that we just kind of ignore the really old and bad parts of. And what's even better is that we did it OUR OWN SELVES. There is so much satisfaction in that, I can't even begin to articulate it. There is nothing like a lot of hard work and then being able to bask in the fruit of your labors.

So on to the next thing, right? Who knows what that might be. I will say that I haven't seen Heidi so full of energy and vim and vigor for I can't tell you how long, so that's a definite plus! (I love you sweetie and am so glad you're feeling better!)

"Hanky Panky" is playing right now. Talk about a song that I thought I'd never hear live again after Blond Ambition.

Anyway, a weird entry, I know. My state of mind is a bit weird, but there are two constants despite it. And they are the love of my girls and my constant slagging on the quality of Madonna's vocals on Blond Ambition. It's how you know I haven't been replaced by a pod person.
Posted by Dan at 1/12/2008 08:30:00 PM