Everybody has those artists in their collection that they just can't bear to reveal. For some, it's that secret copy of Britney's first album. For others, it's a Barbara Mandrell album they can't bear to part with. Yet other choose their guilty pleasure to be Dionne Warwick singing "Theme From Valley of the Dolls." Most of my music collection is one big guilty pleasure, although I once read somewhere (sorry, can't remember where) that the term guilty pleasure implies that there's something to apologize for. I am so far past that point that I can, with great pride, reveal one of my guiltiest of all guilty pleasures: Anne Murray.

I don't know what it is about Anne Murray's brand of 70s not-quite-country, not-quite-pop that I like so much. I have my mom and dad to blame for it, without a doubt. I was raised on a steady diet of this kind of stuff. Heidi once teased me, when labeling Anne Murray one of my guiltiest pleasures, by saying "are you an old lady or what?" Point taken. I actually attended an Anne Murray concert a couple years back and it was very enjoyable. She knew that she was a nostalgia act and played it for all that it was worth. While she played a few songs from her current album, she also knew that people had come to hear the hits, the comfortable songs that feel familiar and cozy. 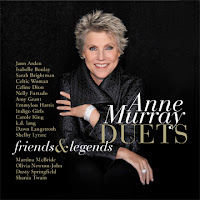 I don't have every Anne Murray album known to man, only a hits collection and that suits me just fine. But when I found out that she was doing one last album, an album of duets with other female singers, I just had to bite. And I knew just what to do. I sent my mom the link to the album on Amazon.ca (not released in the US yet, and not sure when the US release date will be) and asked for it for Christmas. And sure enough, I got just what I wanted, although it took two shots to get the CD as the first one was mortally wounded in transit from Canada. But it finally arrived about a week ago and the good news is that it is VERY good.

Most of the songs are tried and true Anne Murray staples. This both works for and against the album. It works for it by being those comfortable songs that everyone knows, reworked a bit into duet form, with Anne doing completely new vocals for all the songs. It is this familiarity that also works against it, as Anne does not quite have the vocal chops she had 30 years ago. She is a bit of a warbler now, although, as Mary's friend's uncle or dad or whoever said, "that broad can sing!" As is the case with so many of the artists that I follow, they are headed into their autumn years and, let's face it, a 60 year old voice just doesn't have what a 30 year old voice does. So there are some scratchy moments, especially on "Daydream Believer" and "Snowbird" but we'll forgive her because, well, we just will.

That having been said, the standout tracks for me are "Daydream Believer" (recorded with Nelly Furtado of all people!) and "Snowbird" (recorded with Sarah Brightman of "Phantom of the Opera" fame.) I think what I like most about those pairings is the contrast of the voices, Sarah with her classically trained soprano against Anne's alto. Similarly, Nelly Furtado's voice complements Anne's well on what is probably one of my favorite Anne Murray songs (I remember hearing this song on AM radio when I was a kid riding home from the grocery store with my mom.)

Dusty Springfield also shows up, quite an accomplishment considering she's been dead for nearly a decade. Although the thought of a zombie Dusty Springfield is certainly a thought to ponder, it is purely studio magic that allows Anne to duet with her on "I Just Fall In Love Again." I also really enjoy Martina McBride's performance on "Danny's Song." The addition of the rest of the verses helps a lot. I keep getting that part with "Pisces, Virgo rising is a very good sign" stuck in my head! And of course, there's Dame Livvy (not really a dame, but that's how we refer to Olivia Newton-John around our house) who duets on "Cotton Jenny" which is a song I had never heard before, but is written by one of Caryle's most FAVORITE artists, Gordon Lightfoot. ;)

Not every song works - there's a French language song that I frequently skip and I just don't get into "When I Fall In Love" with Celine Dion. Some of the songs make me really want to hear the originals again, most notably "Time Don't Run Out On Me" featuring Carole King as the duet partner never really seems to get started and plus, I have never really been all that keen on Carole King's singing voice.

So who knew that Anne Murray could crank out an album that would be so appealing to this 35 year old guy? Considering she's the guiltiest of all my guilty pleasures, it's not too terribly surprising. And considering her recent comment on Madonna, which Matthew Rettenmund described as not quite a compliment, not quite a slam, I have a newfound respect for her.

"She doesn't sing like Barbara Streisand...(but) she dances like a son of a gun," Murray says of the Material Girl.

Please tell me that Anne didn't leave her hospital bracelet on for the photo! Oops! :)

Nice review, Dan. I've never really got into Anne and I don't think I have any of her singles, but I think I may take a listen to a few of these now that you've given me a head's up.

It sure looks like she did, doesn't it? Rest assured, that's a big old diamond bracelet.

Like I said in the post, what I love most about Anne Murray is that her songs are so comfortable and cozy. Plus, she really did have a crystal clear voice in her day. One of my friends in grad school (who was originally from India) says that Anne Murray songs were a tool he used to learn English - that's how clear her vocals are.