We rang in 2008 in style last night with meatballs, cheese and crackers and Pizza Pit pizza, amongst other health foods. It was just 6 of us (including Anna, who managed to make it all the way to midnight) and we had a good time. There was copious amounts of silly dancing and inside jokes and general fun. This was the centerpiece on our table. 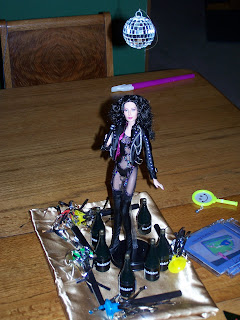 After awhile, Cher suffered a heel injury and had to be retired to the wheelchair. This of course, led to countless jokes about Cher being in the nursing home. (Are you ready for your pills, Cher? Do you need to take a nap?) 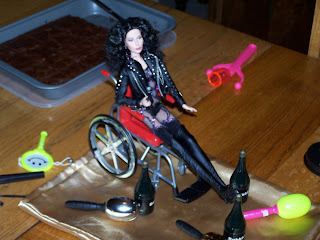 She has recovered after vigorous physical therapy.

The highlight of the night was definitely watching Heidi's 20 minute iMovie that she made (that I plan on uploading to Google Video as soon as I can get my act together.) There was a large amount of cursing involved in the making of it, but the laughs were worth it.

We stayed up till nearly 3AM last night - Mary collapsed from exhaustion earlier, so it was just Heidi, Jeff, Caryle and me. We had a spirited V.C. Andrews discussion (if you're dead, you have a lot of time on your hands to write books. Believe me, this stuff makes sense after several beers and in the middle of the night.) I woke up around 10 after being roused awake by Anna, and we've been pretty productive today. So that's good.

I am feeling a small amount of trepidation with regards to 2008. It does not help that according to Michael Lutin, my forecast for the next 2 years thanks to Saturn in Virgo is something like "The big question is are you going to be more committed to the family or can you function on your own in spite of your fears of being alone?" Now, I don't for one instant think that should be taken literally, but still! WTF? But still, the arrival 2008 seems like a complete severing of all that seemed familiar, so who knows what the year will bring.

I watched Brokeback Mountain again this afternoon for the first time in a long time. I forgot how much that story gets to me. I have no idea why that movie gets to me like it does. Mostly, I feel so bad for Jack and Ennis, truly victims of the time period. But I also think that it reflects more broadly on platonic male friendships. But that's a whole 'nother blog post.

I really wanted to watch the episode of "The Golden Girls" last night where Rose was dating Dr. Jonathan Newman, the psychiatrist who happens to be a little person (is that the right term to use?) Blanche is just a kill in that one. Shrimp? Alas, it did not happen.

Back to work tomorrow, but then onward to Iowa City on Thursday to get Heidi's tooth looked at, then off Friday but I work the weekend. Booyouweekendworkingwhores!