How can you not love this? 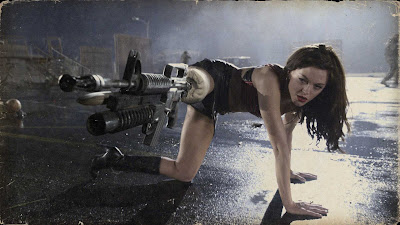 Heidi has posted the Barrowman-Marsters kiss a few times, so I don't feel so bad about going on and on about Rose McGowan and her machine gun leg! If you can't see the coolness in this, well, I'm not sure that there are words that will convince you.

So I managed to finish Grindhouse: Planet Terror this afternoon on the laptop while I was waiting for the car's oil to get changed. There was so much to like about it, I'm not even sure where to start. It wasn't a perfect movie, that's for certain, but it really spoke to my inner 12-year old boy, the part of me that just wants to see zombies get killed and people blow shit up.

The short version of the plot is as follows. Release of poisonous gas has deleterious effects on people exposed to it, turning them into zombie-ish, flesh eaters. As the trailer for G:PT states, "They're not living! They're not dead! And they're NOT STOPPING!" Rose McGowan plays a stripper go-go dancer who, along with her boyfriend Wray, leads a rag-tag band of survivors in an attempt to stay alive. And at risk of sounding completely shallow, Rose McGowan was simply HOT in this movie. I think I could have used a cigarette after watching her on the screen for just over 90 minutes. And surprisingly, her acting was not all that bad either.

The movie was gory with a capital G and some of the deaths and splattering and grossness made even me turn away from the screen. It basked in its political incorrectness (although probably not nearly as much as the trailer that preceded the film for Machete which I thought for certain was fake.) The zombies were relentless and disgusting and made mincemeat out of the living characters, only to be splattered all over kingdom come by machine gun fire and rockets and other such stuff later in the picture. Basically, it rocked all over the place.

But my favorite part of watching Planet Terror was how it was filmed. Actual grindhouse theaters usually possessed second or third generation copies of the exploitation films they showed, the films often showed significant signs of wear and tear, with dialogue cutting in and out and scratches on the surface of the film. Through the miracle of modern technology and visual effects, all these things were put into Planet Terror, much to my great delight. That attention to detail really enhanced the viewing experience for me.

Exploitation films are certainly not something to be proud of, but they are an undeniable part of cinema's past. While I'm certain that these kinds of movies are bound to offend a lot of people (but please, when was the last time something Tarantino had a hand in DIDN'T offend someone?), Planet Terror was still a fun throwback to a day gone by. Perhaps we should be thankful for the fact that those days are gone by. But still, Planet Terror did not disappoint me in the slightest.

Now, I just need to get this: 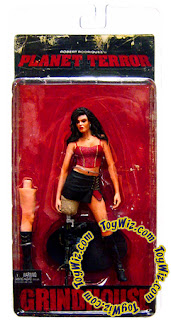 Hello good sir. Found you from the Poisoned Apple blog. And lo and behold, you're talking about my favorite movie of last year.

Not sure if you saw Tarantino's (ahem) effort toward Grindhouse, but this flick did CIRCLES around 'Death Proof.'

Anyway. I'm ecstatic that they made an action figure of Machine Gun Leg Rose.

Ha! Made my parents watch it on video on demand at Christmas :P

Pity it wasn't that successful. I saw it in the theater the weekend it was out.