Darling, just be yourself tonight 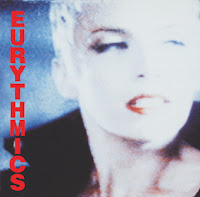 Every now and then, I wonder what it was like to listen to one of those "classic" albums before they were classics. For instance, I wonder what Rumours sounded like before it sold a bazillion copies and had spun off 4 hit singles. As a long time Madonna fan, I've had the opportunity to do this with her records before the albums became collections of hit singles. But recently, I've come across an album that I really wish I had been able to do the "virgin listen" with.

On the whole, Eurythmics albums are rather hit and miss for me. For every classic album they have (Savage), they have one that doesn't really do it for me (Touch - I know! Heresy!) I'm not sure why this is, as I really do love Annie Lennox and the production is right up my alley. But for whatever reason, some of their albums really appeal to me, and others, I can leave with no problem. Be Yourself Tonight, which I have just recently listened to in its entirety, falls into the former category.

Be Yourself Tonight is probably the Eurythmics album on which there is the largest percentage of recognizable hits. At only nine tracks, that doesn't take much, but almost half the songs were released as singles, those being "Would I Lie To You", "Sisters Are Doin' It For Themselves", "There Must Be An Angel (Playing With My Heart)" and "It's Alright (Baby's Coming Back.)" Listening to the album now, there's a sharp demarcation between those famous hit singles and the lesser known album tracks. Oh, here's a hit single! Oh, here's a song I don't know. I really wonder what it would have been like to listen to this album when the only song that you knew going into the listen was "Would I Lie To You."

As an album, it ranks right up there with my all-time favorite Eurythmics album Savage. A bit more pop-rockier than the previous efforts, it does have some ace songs, and I'm not even talking about the singles. "Here Comes That Sinking Feeling" is a personal favorite as it served as a bit of a "personal work theme song" when I was working retail pharmacy in Iowa City nearly a decade ago. The album is a perfect example of how less really is more. The CD age has seen artists feel compelled to fill up every single minute of the CD, compromising the integrity of the album in the process. Be Yourself Tonight clocks in at a tight 43 minutes and is intriguing and appealing for all 43 of those minutes.

Annie Lennox is in such fine voice on this album and it is immaculately produced, however, the Eurythmics' fortunes would start to fail with their next release (Revenge) and fall even further with Savage. But for what it's worth, Be Yourself Tonight is a classic album of the 80s and one even casual Eurythmics/Annie Lennox fans should give a spin from start to finish.

The remastered version released a few years back has 6 bonus tracks, including two remixes, a live track and some unreleased stuff from (one assumes) around that time, including a killer cover of The Doors' "Hello I Love You."
Posted by Dan at 1/06/2008 10:29:00 PM

"Sweet Dreams" was one of the first 45s that I bought when I began buying records after Blondie broke up. I have both "Sweet Dreams" and "Touch" albums on my iPod and still listen to them today. They are the two most Eurythmics albums that I listen to often along with "1984 - For the Love of Big Brother" which for the life of me not many people talk about. I thought "1984" was an excellent album, but I guess they didn't see it fit to reintroduce the album during their re-issue period. I'm glad I found a copy on CD not too long ago as I think it's hard to find today.

I actually did not like this album when it came out. I liked the singles, but didn't get the rest. It was only after Diva that I fell for "It's Alright" and other like "Conditioned Soul."