Yesterday, the conservatives came out in what they hoped would be droves but what ended up looking like far less than they probably hoped for at the Iowa Statehouse to demand that the Iowa legislature debate an amendment to the Iowa Constitution defining marriage as the union of one man and one woman. This is in response to the decision late last summer by a judge that the state's marriage law was unconstitutional.

I have mixed feelings about this rally and the people involved in it. While I don't even remotely begin to agree with these protesters, I have to respect their right to speak their minds and feel as they feel. As much as I just wish they would shut up and keep their bigoted opinions to themselves, they have the same right that I do to speak what they feel. But what is the cost of their rhetoric? At one time, it was completely acceptable to speak in a racist fashion, now that can land you in exceptionally hot water. When will this day come for gays and lesbians? I feel like the tide is turning, but that day may yet be a long way off.

I don't know. I don't think that a constitutional marriage amendment in Iowa will gain a lot of traction unless the Democratic majority we have now is somehow voted out. What I think is quite funny is the use of a simple demand "Let Us Vote!" to sum up what is really a very complex issue.

The last thing the world needs is me spouting about it, but I will anyway because it's my damn blog. The Des Moines Register has a bunch of photos of the rally posted. I can't believe these people would allow themselves to become the "face of bigotry" but I suppose they don't really see it that way. Despite the serious nature of the story, this one made me laugh out loud. 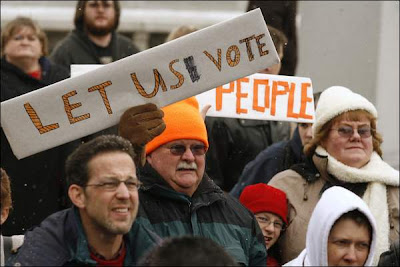 There is a whole segment in gay activism that believes CrazyAss Rev Fred Phelps has been good for gay rights. And I think I see why. It may be true.