No need to run and hide

I've been listening to a couple songs today that really struck me. They both address pretty much the same thing, but are quite dissimilar otherwise. The first is Black's "Wonderful Life" which played over the end scene of an episode of Queer As Folk (the one in which Brian has broken his collarbone on the Liberty Ride and insists on finishing.) I had the song on the QAF Season 4 soundtrack but it never really resonated with me until just recently. Most of my pop blogger friends probably know it well since it's an oldie, but honestly, I had never heard it before!

What I love about this song is it celebrates the beauty of standing on your own. However, it also recognizes that while, as Madonna says "I can make it alone" it is sometimes preferable not to.

Look at me standing, here on my own again.
Up straight in the sunshine.
No need to run and hide
It's a wonderful, wonderful life.

Brooding and, oddly enough, in a minor key, if you listen to it enough, you actually start to believe him. Ace of Base covered this song on their Da Capo album, but it is too bouncy and cheery. Not enough brood for this Angel, I guess! 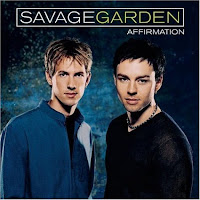 The other song, as I said addresses much the same points. It is Savage Garden's "Affirmation." This has always been one of my favorite Savage Garden album tracks. I swear, the more I listen to Darren Hayes, the more I like their non singles. (Yes, I know it was a single in Europe. Spare me.) Because, let's face it, they were definitely a singles band.

Anyway, Darren lists off all these things that he "believes" in the song. And I daresay that I pretty much agree with him on nearly every single point. Yes, it could be argued that the sentiments are annoying, hackneyed cliches. True, to a point. But it is wrapped in such a great pop sheen that I am powerless to resist it. Especially the chorus.

I especially love it when the chorus is sung for the last time and Darren slips into his falsetto on the "grass is no more greener on the other side" line. Grammatically offensive, yes, but fantastic.

I am fond of letting the music I'm listening to set my mood and sometimes vice versa. And these songs, while simple pop songs really do appeal to my quiet introspection. Who would have thought?
Posted by Dan at 4/14/2008 08:59:00 PM

Funny you should mention "Wonderful Life". I first heard the Da Capo version and liked it, as I liked the entire album, really. Then I had downloaded the QAF soundtrack and quickly ran through the tracks. Black's version struck me too, but I was like "hey, isn't this AOB's song??" That was the extent of my first impression. Well, flash forward to many listens later and now I think I actually prefer the "darker" version because of the emotion, which feels, albeit darkly, more real to me. If that makes sense!

Oh that totally makes sense. In many ways, it was the point I was trying to make (perhaps not very effectively.) The darkness and broodiness is what makes it seem more authentic and real to me.

I actually ordered Black's Wonderful Life CD from 1987 on a whim last night from Amazon Sellers. Hope it's good!

My favourite Savage Garden song is a b-side called, "This Side of Me". I like Darren's solo stuff much, much better.

Speaking of 'Who Would Have Thought', that's one of the singles from Darren's latest release, "This Delicate Thing We've Made". Good stuff! LOL