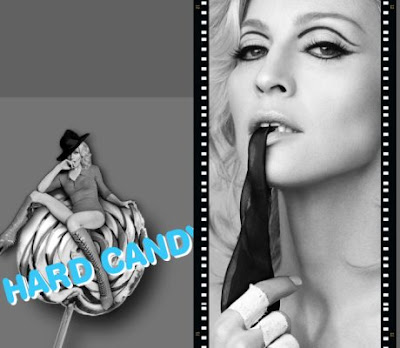 As you can probably guess, I gave into temptation and listened to the leak of Hard Candy. I just couldn't resist being part of the early listening party.

It is my pleasure to report (as I kind of did in the update post from a couple days ago) that it has surpassed my expectations. Granted, those expectations were pretty low, probably lower than they have been for new Madonna in quite a while, possibly ever. I just couldn't get my head around Madonna doing hip-hop and since I don't really do hip-hop, I was nervous that it would be the first place that Madonna has gone in 25 years that I wouldn't be able to follow. My nervousness was for naught because Madonna has crafted an album that successfully blends the hip-hop/R&B sounds so popular on today's radio with her trademark pop/dance groove.

Taking a cue from my good pal Yuri, what songs are doing it for me right now?

Candy Shop. I can't believe I'm writing that because I was thoroughly underwhelmed when the "demo" (which ended up being pretty much identical to the finished product) leaked last summer. Despite that, I found myself listening to it more and more in the run up to the album, especially after "4 Minutes" was officially released. It is, without a doubt, the least subtle double entendre we've gotten from Madonna since "Where Life Begins." Of course, Sherman tanks and tactical nuclear warheads are more subtle than "Where Life Begins" (how can you compete with "dining out can happen...down below" and "Colonel Sanders says it best...finger lickin' good..."?) But the constant barrage of "stick-sticky and sweet" combined with the "come on into my store, I've got candy galore", one cannot help but think that the candy shop is not your every day, run of the mill chocolate shop. Plus I love it when Madonna is naughty.

Devil Wouldn't Recognize You. As beautiful as Confessions is, it was really lacking in the ballad department. We knew that going in, but a lot of fans really missed her ballads. I, for one, did not, but it is good to hear her singing them again. Especially one that is so somber. It is also in a minor key which regular readers know I am thoroughly unable to resist. Apparently "Devil Wouldn't Recognize You" has been hanging around for a long time and I'm glad it finally found a home here.

Dance 2Night. I've read a lot of reviews by fellow bloggers that are singling out "Dance 2Night" as one of the weaker tracks. I have to say that I wholeheartedly disagree with this. More than any other track on the record, it sounds the most like 1982 Madonna! It seems like it could be an outtake from the debut if it were not for Madonna's vocals which are in the lower part of her register. I realized a few years back that pretty much all the female artists that I love the most are altos, so Madonna's transition away from the helium-filled vocals of the early years to the more natural sounding vocal she uses now was a welcome change. But if "Dance 2Night" is not a single, it would be a crime. I would love to see how this one is remixed.

Give It To Me. The next single, apparently. You can hear it playing in the background of that video of Madonna vacuuming. It has a good groove and while the lyrics are pedestrian, the music is fantastic! The funky keyboard behind the chorus is one of my favorite things about the song, followed quickly by the "Don't stop me now, don't need to catch my breath/I can go on and on and on" part. Sadly, I feel the song is marred a little bit by the "get stupid, get stupid, get stupid, don't stop!" breakdown which substitutes for a real bridge. And as everyone knows, all of Madonna's best songs have to-die-for bridges. Even a relative throwaway track like "Who's That Girl" is saved by a brilliant bridge ("Light up my life/So blind I can't see.)

Hard Candy is more hit than miss for me, although when she misses, she misses by a mile. "Spanish Lesson" WTF? I don't get it. And despite my best attempts, I have not been able to warm to "Incredible" which I just don't like. It is the longest song on the album, but by far the worst.

Heidi has still not been won over by the record, which she is referring to as Madonna's "flying buttresses" album. That's a reference from a review I read for Dolly Parton's Slow Dancing With The Moon album on which Dolly surrounded herself with the biggest names of early 90s country music on nearly every track. The reviewer complained that a songwriter and performer as accomplished as Dolly does not need flying buttresses to support herself. Ultimately, neither does Madonna. But perhaps she did to get that big old laced-up boot back in the door at American radio.

Overall, Hard Candy gets a solid B+ from me. It is not a new Madonna classic and certainly no Confessions on a Dance Floor, but it is certainly capable and will keep me satisfied until her next project. And I'm just starting to picture the next tour, which I am imagining will be long on new material and short on the 80s hit parade.

I think "Dance 2night" is the best track on the album! It catched my attention immediately. And I second your thoughts on how it sounds/feels like '82. In a very good way. A solid album indeed... although I find Pharrell's "singing" laughable!

I couldn't decide whether I wanted to rate it an A- or a B+ on my review and, after a few hours I found myself leaning more towards the A- more than anything else.

I like Dance 2night, but can't seem to tell if she's actually enjoying the song at all. Sounds like she's wondering whether the stove's been left on...

I waiver daily on which is my fave song. Today is "Give It To Me". Yesterday was "The Beat Goes On." I am betting that Paul wishes the "instrumentation" line was left in there. :)

I'm still leaning toward the Pharrell songs but the Timba tracks are coming along nicely as well.