I struggled with the title for this post - oddly enough, those are usually the hardest parts for me to write. Getting the body of the post written is usually pretty easy. But giving it a title, a different story altogether.

After a 2 year battle with colon cancer, Emily Tadsen, the mother to my good friend for the past 22+ years Jeff, passed away. He called us tonight to let us know. I have very mixed emotions tonight about her death. On one hand, I am glad that she is finally out of pain and no longer has to struggle. On the other hand, I can't believe that this incredibly vibrant woman who I have had the pleasure of knowing over the last two decades is no longer with us. I think I'm still processing that.

I can't even begin to know how Jeff's feeling right now. I don't think anyone is ever ready to lose a parent, no matter how expected it is or what the circumstance is or how much it is their time to go. I will not even pretend to know what he's going through. However, Em has been in my thoughts a lot this week as you might imagine. She was not my mother, but as the mother of someone who I consider pretty much a member of my family, I feel a bit as if I have lost a family member.

The thing I can say most about Emily is that she had a presence. When she was around, she was there. We always made jokes about the glitter sweatshirts and the frosted hair and all that, but truly, these were an essential part of her charm and we wouldn't have had her any other way. Whenever I was at Jeff's house, no matter how old I was, she always treated me as if I were one of her own and always had conversation and usually cookies or some other dessert. Frequently, the conversation was about "The Young & The Restless" or the famous night in 1990 when Jeff, Kathy, Jen and I were chased on Highway 71 north of Carroll by someone unknown to us. We ended up turning off in Mt. Carmel and lost them there. Henceforth, it was known as the Midnight Run to Mt. Carmel. For years after the incident, she would faithfully ask me if I had been to Mt. Carmel recently whenever she saw me.

It's things like this that will live on inside of me now that Em is gone. Last December, Jeff's sister Dee Dee had a surprise party for Jeff upon the completion of his Master's Degree and talk turned to Emily. She has so many funny stories associated with her. Her complete mortification of me talking to her nonchalantly about "Y&R" after she had "taken her face off for the night" (I didn't even notice, which probably would have mortified her more.) The candy cane sleighs that she was so proud of that she called Jeff up at school several times to tell him about it, only to have him completely shatter them when he arrived home from college. "You're not Nelson!!" The list goes on and on. Most of them are inside jokes that would make no sense if I told them, but they are embody what I will always remember about her.

So even though Emily has shuffled off this mortal coil (on to something infinitely more fabulous, I'm certain), I can't help but think of the words that Madonna sang 14 years ago. Written about her own mother's death, she sang:

I will always have you inside of me
Even though you're gone
Love still carries on
Love, inside of me

And there's probably no doubt that Emily would pale at having a Madonna song dedicated to her memory. 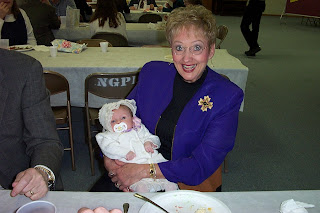 Here's to you Emily. I'll miss you terribly, but your spirit lives on. You were truly a phenomenal woman (Olivia Newton-John mp3, limited time only folks.)

That's so sad Dan. Am thinking of you and Emily's family. *hugs* xoxox =(

What a GRAND DAME! One of the all-time greats, indeed. The one who defines the statement "My life is enriched by knowing her" and this family...... Much love to you all, Bonnie Kinkead, Williamsburg, Iowa.

My mom just finished the last round of chemo for same a few months ago - I can't imagine how hard it was to watch one's mother die that way. Sounds like it'll be easy to remember her with laughter though, which is infinitely better than tears. Godspeed to Emily and my condolences to everybody who's missing her.

A lovely write up Dan, I'm sure Emily would be so touched and proud. Hugs and prayers to you and yours and of course her family.

That is just terrible - it makes me want to call my mom right now.

Please give my condolences to Jeff. I hope some sort of special music can soothe him right now.