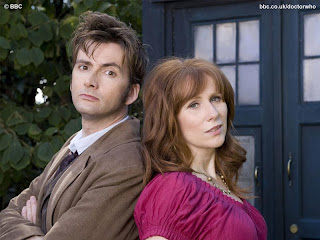 We finally got around to watching the first episode of Series Four of Doctor Who last night, which premiered on the BBC a week ago Saturday. I will admit that I was a bit leery, mostly because of the choice of companion for the Doctor. David Tennant as the Doctor can do no wrong, but an entire season of Catherine Tate as Donna? Runaway Bride Donna? Shrill, shrieking, annoying Donna? I was not convinced.

I am happy to report that not only is Donna tolerable, she was actually very good! I will not spoil anything about the episode as it will be running nearly concurrently on Sci-Fi (chopped up a la Torchwood, I imagine) but I am MOST PLEASED that certain things were addressed head on. And it also had an ending that I would never dream of spoiling (even if it weren't running on Sci-Fi) which I didn't see coming AT ALL. Even Heidi didn't see it coming, and she always sees stuff like that coming.

We have the second episode to watch tonight, which I am very much looking forward to. This is a good start for Series Four, which will (sadly) be the last full series until 2010. At least there will be the Christmas special in December and three new eps in 2009 to keep us satisfied while Tennant is off playing Hamlet.