(Come on, you knew I couldn't resist that subject line.)

I wanted to do at least one blog from New York. As predicted, the time to e-mail and/or blog has been pretty limited. However, as I said before I left, I was certainly not going to spend all my time in New York doing the shit that I can do at home.

The last few days have been full of exciting adventures. I have also parted with a lot of cash but I knew in my heart of hearts that you can't go to New York and not spend more money than you intended. Somebody mentioned to me last week that whenever you plunk down money for a big ticket item like a vacation, you count on the memory being worth the investment. Or something like that anyway. Well, I can certainly say that while the vacation has been expensive - more expensive than I would have personally preferred, it is certainly providing us with a lot of once-in-a-lifetime experiences that are more than worth the investment. As my father says, "you don't want to be the richest guy in the graveyard." (which alternates with "they're not going to dump the money in on top of you when you're in your coffin.")

So Wednesday was the Statue of Liberty which Anna really wanted to do and, truth be told, so did I. It was one of those things that I couldn't imagine going to New York and not seeing. I was a hero for pre-ordering those reserved tickets because the line of people waiting in line for the non-reserved tickets was amazingly long. Having the reserved tickets got us to the front of that line but then we had to stand in another line (not quite as long) while the wind whipped off of New York Harbor and slowly turned us into popsicles.

It was, as Eddie Izzard would say, fucking freezing. The ride on the ferry was bitterly cold, we mostly hung onto our hats the whole way. Once we got onto Liberty Island, the wind seemed to abate a bit and we were a bit better, but even so, the wind was just so cold! Although we went through security to get on the ferry, once there we had to go through yet ANOTHER round of security to get into the pedestal of the Statue. It was worth it because there is a pretty cool museum and you also get an up close and personal view of the torch that was taken down during the 1980s renovation of the Statue. We also took the opportunity to take some intensely screwball pictures as is witnessed below. 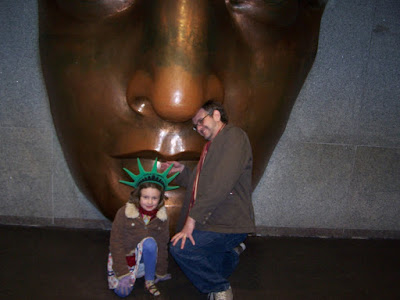 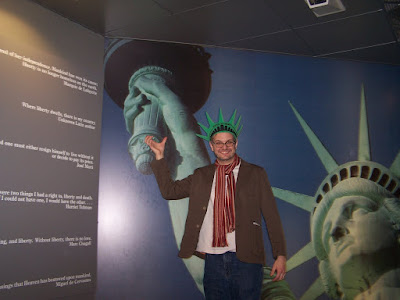 I also got a very couple of very iconic shots of the Statue which nearly everyone has seen in books and you can buy on postcards on any street corner, but the difference was I took them with my very own camera! 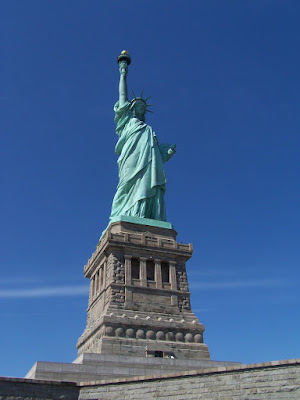 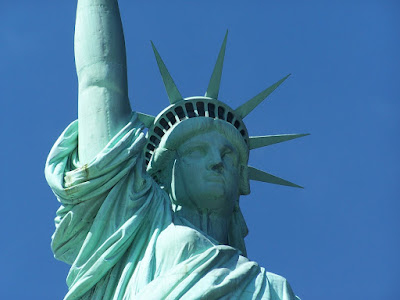 After all was said and done, I'm glad I went, but will definitely skip it on any other trips to New York. Once was plenty.

Most of yesterday was spent in Central Park where we mooched some free wi-fi and Anna rode the carousel. She and I also walked the mid point of the park and then from the east side clear over to the west side so that I could see the Dakota (which famously stands in for the Bramford in Rosemary's Baby.) I also got a couple good shots of Sheep Meadow, the site of Babs' 1968 A Happening In Central Park concert. It was so much smaller than I expected.

Heidi and I subwayed down to the Village last night and walked until our feet were about to fall off. We found a cute little restaurant called Le Petit Bistro. The operative word was definitely little. Even the bathrooms were little! But the food was good and we were certainly glad that we held out for it.

Today promises rain, but we're still going to try to head out and subway around some more. We want to take Anna down to Times Square (Heidi and I explored that the first night we were here) and I'd like to head over to Broadway and hit Forbidden Planet. I do plan to sleep in some tomorrow morning as there has not been nearly enough of that.

One casualty of the vacation has been my beard. It is gone (for the moment.) I realized upon our arrival that I forgot to pack my beard trimmer. Because of my firm belief that if you're going to have facial hair, you need to take care of it, I decided to shave it off rather than become Grizzly Adams. I still hate how I look without it. Looking in the mirror is very jarring when I am clean shaven! But by Saturday I should have a good majority of it back, so no worries on that front. Even this morning I can see the beginnings of it. Soon we will be to the scruffy half-beard stage that never fails to get the missus all excited.

This may very well be the last blog while we're on the road. I'm getting a Google Photo set ready for those who would like to see it. A few of you have already seen the pictures, and I'll post a full link here when all the best pictures are uploaded.

Which will be after we get home. Because I don't want to spend my vacation uploading photos. But I will upload this last shot because it pretty much perfectly encapsulates Anna's reaction to New York. I took this yesterday in Central Park and while it was slightly posed, it also has a candid element to it that makes for the best photos. 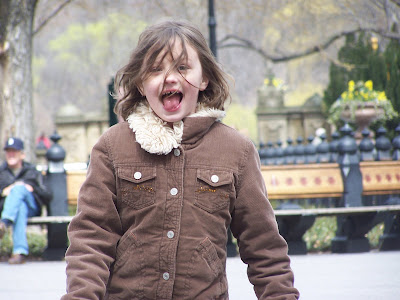 Ahhhh, it sounds like you guys are having a ball. I shall live vicariously through your holiday; I've never actually been on a proper holiday ANYWHERE and am reaching a point in my life where I know I'm almost overdue one.

Japan's apparently happening next year for me, so until then, I shall absorb the stories of anyone going overseas with great gusto.