The last Saturday night we were in New York, I went off on my own and took the subway down to Christopher Street, which is in the West Village. It is also what may be considered the cradle of the LGBT movement in this country. Much like the ocean, I couldn't go all the way to New York and not go there, not when LGBT rights is a cause so close to my heart. Heidi and I actually got off the subway at the Christopher Street stop on our night out exploring the Village, but it was dark and it was our first time down there, so we weren't really sure where we were going. But when I went down on Saturday night with the express purpose of finding the Stonewall Inn, I made sure that I knew where I was going. 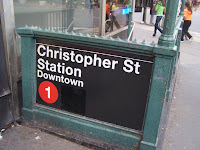 What is so cool about Christopher Street and the Village in general is that in many ways, it's a small town in the midst of the huge city that is New York. But make no mistake, you're still in New York. You get off the subway at Christopher Street and 7th Avenue. You can see a Starbucks and a GNC, but what you also see is a neighborhood. It's a relief from the tall buildings and detachment that seems to characterize a lot of Midtown. Although you can still see the Empire State Building from parts of the Village, it feels a lot different and is almost midwestern in many ways.

Anyway, I got off the subway and headed down Christopher Street looking for the Stonewall Inn. Naturally, I headed in the wrong direction as I only had the address but by this point, the tea had been spilled on the laptop so Google Maps was not an option prior to heading out. This was okay as sometimes the most interesting things in life (mine anyway) happen quite by accident. One thing I found quite hilarious was the fact that a Junie B. Jones Live! show was just getting over as I was walking down past the theater at which it was showing. Piles of young families were pouring out of the theater and began the walk west down Christopher Street to the subway stop. To get there, they had to walk past fetish and porn shops. It's a funny dichotomy of the Village. Family friendly, but yet, not so much. I wonder how uncomfortable some of those parents were.

Once I figured out I was headed in the wrong direction, I headed west and before long, I had found the Stonewall Inn, site of the Stonewall Riots in 1969 and the beginning of the LBGT movement in the U.S. 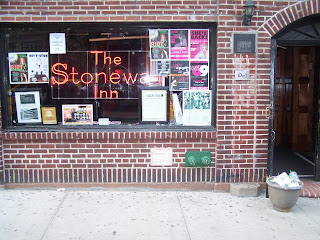 Here's the plaque that's by the side of the door: 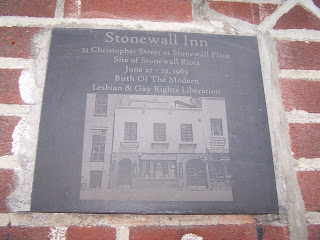 And here's an article from back in 1969 describing the riots that is posted in the window. 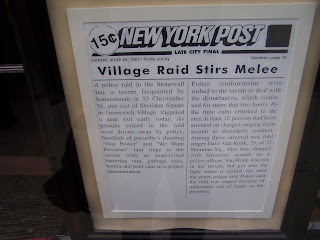 Across the street from the Stonewall is Sheridan Square Park, which contains sculptures done by George Segal commemorating the gay rights movement. 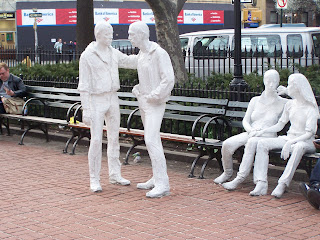 According to the information sign that went along with this display, there was apparently a lot of public opposition to the design and it took nearly 10 years to get the statues officially placed and unveiled. Once this was accomplished in 1992,

"The initial opposition and that had greeted the project had subsided; the advent of AIDS, which had devastated the gay community in particular, added another poignant dimension to the monument its mute figures' impact."

The one thing that I took away from my entire Christopher Street experience is this: Christopher Street is haunted. You can feel the presence of ghosts of those initial victims of AIDS, who died back when otherwise healthy young men were succumbing to a pneumonia seen only in immune suppressed patients, a rare cancer usually striking elderly men in the Mediterranean and intestinal parasites not previously known to infect humans. This is the place where these men lived and died, lives cut tragically short in large part due to the government's failure to quickly recognize the threat and act decisively. And while those days are long gone (thank heavens), they should never be forgotten - something I fear is happening now that AIDS has become a "chronic, manageable illness." (which it is not.)

It was so important on so many levels for me to take that tour of what basically amounts to "gay New York." It was taken as a tribute to every single gay friend I have who are so dear to me and also as a trip through a history that we would be wise to remember. 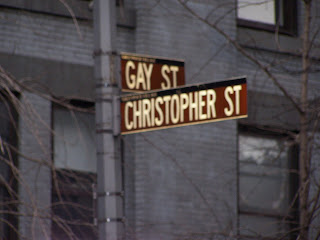 Cool sculpture. I went to college with its twin:

It's a bit wind-y around Stonewall isn't it? All those roads going every which direction, it is easy to get lost. But you are so right that the Village seems like a proper village in some ways, especially down on Bleecker and then back in the areas with the rowhouses. Unlike awful, hideous Chelsea.

I do think that the Village has succumbed a bit to the gentrification /globalization craze - little stores that were there for YEARS are gone and Guiliani closed a lot of the random adult shops there. I liked the idea that New York allowed it's adult shops to exist in those areas because they were for adults who could choose to patronize them or not. NYC has always been about the merging of personal freedom and up-close coexistence with people quite unlike yourself. I love a place where no one bats an eye at kookiness.

The Village is also haunted by what no longer lingers on the horizon - World Trade. I think that has forever changed downtown and the absence of those buildings has a presence, if you know what I mean.

We must talk about your trip soon!