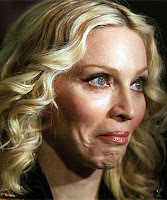 Much sooner than I had expected, a French radio rip of Madonna's forthcoming single "4 Minutes" (or is it "4 Minutes To Save The World"?) has leaked onto the mighty internet. I was in Des Moines tonight when the first flurry of activity hit my inbox, and you can bet that downloading that sucker was one of the first things I did upon arriving home.

So what do I think? I'm not sure. It is not as instantly classic as "Hung Up" in that it didn't grab me by the shirt collar and demand to be heard. But I had already resigned myself to the fact that it was not going to be a retread of Confessions. To do so would be, well, very un-Madonna. The song does, however, have a killer chorus. There is a hook in there that snuck in and got me on the very first listen. Madonna's vocals are also very good. Despite my misgivings, pairing her vocally with Justin Timberlake was apparently a good idea.

OK, what don't I like about it? Oddly enough, the horns. It also has this odd marching band quality to it, so much so that I keep expecting to hear "just tell me that you love me....TUSK!" sampled into the song.

So it'll be interesting to hear it in high quality, but I think it'll grow on me. If for no other reason than that chorus.

God, I love it when Madonna releases new shit. It's so damn much fun.

I saw the title of that song on your scrobble list and wondered if it was a leak from the new album. I love when I'm right!

I hope for both your sake and Jeff's that this new album is a good one. Considering the time between new albums, it's a long time to wait for something new when you're provided with disappointing material.

That song has number ONE written all over it!

I am in mourning. I have written my own review on my website. Surprised you like it considering your love of Confessions.

I love it but it needs to be heard in HQ. There are some Madonnaesque things happening on the chorus that are muted on the rip, like some flutey things - do you hear those? Her songs almost always have that beat/bass and then something like the flutey things at the other end.

I actually was not a fan of Hung Up initially, btw!

alright so I don't really care about this madonna song but I was trying to figure out the name of a song that I heard many years ago tonight by searching the words "just tell me that you love me" and "marching band" (this is all I remember about the song as I heard it when I was like 7 and now am 21). I think you might have referenced this song in you review of 4 minutes. So if you would help me get this song out of my head that has been stuck in there for 14 years then just reply with the title of the "just tell me that you love me" marching band song". I don't even know if I have made this up and the song probably sucks but I just want to hear it once. Thank you.

Well, Patrick, the answer to your question is Fleetwood Mac "Tusk"

At least I'm pretty sure that's the song you're looking for.