Nerdery Week: Through the wilderness

As I'm sure anyone can tell from my Nerdery Week posts, I am completely and utterly free of all obsessions. OK, that's more than just a little white lie. Perhaps my biggest obsession is with her Madgesty, the Queen of Pop music, Madonna. Love her (like I do) or hate her (like many others do), there's no denying her marketing savvy, ability to do a pop song like no other, and her natural tendency to have her finger on the pulse of what is up and coming (although that seems to have faltered a bit in recent years.)

As a teenager, I had a poster of Madonna from the Who's That Girl tour book on the back of my bedroom door. It featured the look that I now profess to like the least - the platinum blond (almost white) hair with the dark eyebrows. That poster has disappeared without a trace, but here's the image - how young she looks! An iconic picture, but I still hate the look. 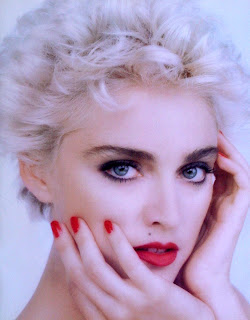 But enough about Madonna stuff lost in the shuffle! What Madge items can be found in my office now? Ask and you shall receive. Probably the best place to start is my iTunes. Limiting artist to "Madonna" this is what you get (you'll have to click on the image to get anything out of it): 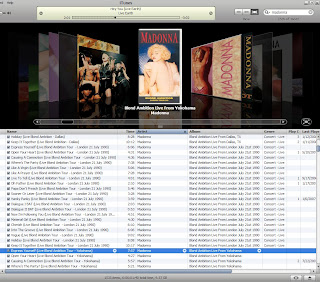 Granted this contains some mash-ups, 5 different Blond Ambition Tours, 3 different Confessions Tours, 4 different Re-Invention Tours, and a bazillion and one fan-made mixes, but still. It's 1535 items, SIX DAYS worth of Madge. But perhaps the most embarrassing thing about posting that is the fact that I was actually listening to "Hey Poo You" at the time.

As you walk into my office you see this in the corner. 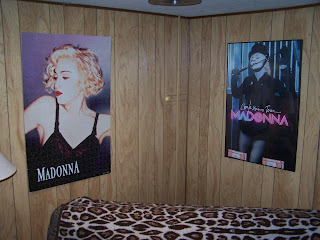 The picture on the left is a puzzle that my parents picked up for me somewhere when I was in high school. As we did with a lot of puzzles in our house growing up, we mounted it on a piece of plywood and hung it up. The only problem was, I never actually put it up on a wall. Part of the trouble was it was so dang heavy!! The puzzle is quite big (not sure of the actual dimensions and too lazy to go measure) but damn, talk about another iconic photo of Madonna. The only way it would have been better is if it had been this one (probably my all time favorite photo of Madonna) or this one. The second image on the wall is an official Confessions Tour poster, the only official tour poster that I have. (I had a Drowned World one, but it was crunched when we moved.) Framed and containing the tickets to prove we were actually there, it took me forever to actually get it on the wall, but it hangs with great pride now.

Speaking of tours, whenever you go to a Madonna tour, you are inundated with merchandise. Most of it is shoddy tour merchandise to be sure, but that has never stopped me. I am not a big fan of tour shirts (seriously, they're paper thin and so damn expensive) but the tour book is always a must-purchase. Each of the tours I have been to, I have picked up one of these. Usually they are quite pricey, in the neighborhood of 30 bucks, but they are far and away one of the more durable tour souvenirs.

Also from the Confessions Tour and frequently found in my office, is the Confessions Tour mug. It is my coffee cup of choice - if it's clean, I'll probably choose that one. If it's dirty, I'm liable to clean it so I can use it. I am a huge mug enthusiast (and if that doesn't ratchet up my nerd credentials a few notches, I don't know what will) and usually pick one up from just about everywhere we go. Sadly, this is a replacement mug from the one I actually purchased at the tour because of an unfortunate run through the dishwasher by the former. 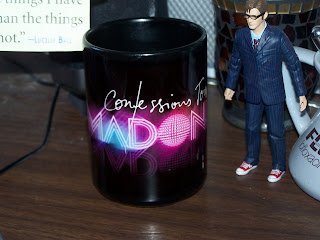 I alluded before that I have very few true Madonna collectibles. This next item is one of the few. I blogged a while back about how I came to own Madonna's Sex book. And the French version, no less. Take a few minutes and read that if you like, because I really do think it's a great story. But here's the Sex book, as it appears in my office. 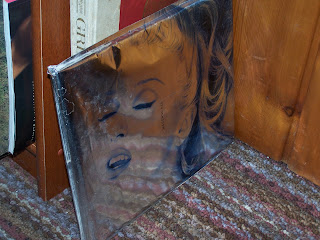 I will not post any of the pictures from the actual book as this is still a somewhat family friendly blog, but perhaps most importantly, I have friends that read from work and I would hate for them to get fired because of the Sex book. But if you are curious as to what my favorite photos are look no further than here (link NSFW!! but hilarious!) or this one (again, link NSFW!! but hilarious!)

One final Madge related item. It's Moodonna. Complete with cone bras on her udder. Found this in a toy shop in Iowa City (OK, didn't exactly stumble upon it. I went searching for it.) 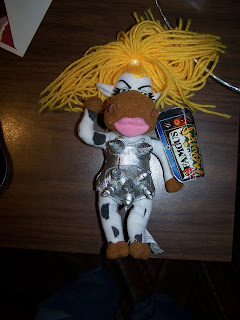 Her tag has the following poem in it: "Like a beanbag, (whoo!) stuffed for the very first time, Her music is great, but her acting's a crime. Now check out those udders, She's the talk of all Mudders. This material cow is way past her prime!" Even then they were declaring Madonna "over."

I could go on and on (and, arguably, already have) but that's enough for now. Suffice to say, my Madge love is one of my least cool things, but it is not one I would trade for the world. The woman has made music that is the soundtrack of my life. It has seen me through incredible highs (not that kind!) and equally incredible lows. And based on that alone, I will buy the new album, no matter what the CW says about her attempt at hip-hop.
Posted by Dan at 2/20/2008 01:23:00 PM

Adem With An E said...
This comment has been removed by the author.
6:02 PM

This is, by far, probably my favourite Madonna related post that I've read in quite a while.

I used to have a big poster of the BAT program cover, which mysteriously went missing during a house move. I was in my teens at the time, and cried for hours when my mother had established it was gone.

YOU LUCKY THING, getting to go to her tours. Hopefully she brings her bum down under for the next one...

I hope that she tours in Australia as well next time around, considering she came *this close* to bringing the Confessions Tour down under.

I'm glad you liked the post, it was a labor of love.

LOVE the Express Yourself video! That rubber dress, the chain around her neck on the bed, the monocle... best video ever for me. So when I saw your poster, I was so jealous! Like Olga is gonna allow that ...sigh... but I can still dream can't I?!

The Confessions Mug is a nice item too. Your office is like the Madonna Megastore! :)