The King of Kong

(Warning: This is long, or at least has the potential to be.)

When I was a kid, I loved arcade games. I spent more time and money in the back of our Hy-Vee store than I care to think about, plunking quarters into Frogger and Mario Bros. and Sinistar. On my first trip to Adventureland, I nearly fell over dead from excitement when I saw a whole arcade devoted to these games, many of which I had only read about or seen played on Starcade. For a brief moment, while walking down their old Main Street mock-up and seeing the sign "Penny Arcade" over the arcade, I thought that the games really would take pennies. Sadly, no. 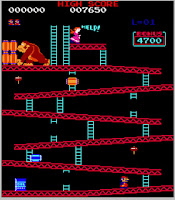 Anyway, yesterday on my day off (when I couldn't even be bothered to take a shower or comb my hair) I watched The King of Kong: A Fistful of Quarters which arrived from Netflix a full day ahead of schedule. Because of my love for retro games and Donkey Kong in particular, I was really looking forward to watching it. It had played at the Varsity here in Ames for a while last fall and several times, I was tempted to go see it. For all the usual reasons, it never happened (no money, no time.)

The documentary looks at the intense rivalry that develops between Billy Mitchell, a retro gaming celebrity and Steve Wiebe, an recently laid-off engineer from Redmond, WA, thanks to Wiebe's attempt to break Mitchell's long-standing world record Donkey Kong score. Wiebe, faced with all this time on his hands gets an actual Donkey Kong arcade game and sets out to best Mitchell's record. I'm not spoiling anything by saying that he does it. What follows is worthy of being called high drama.

It's funny, this little movie about Donkey Kong, classic game competition and (honestly) macho posturing really affected me on a deep level. As with all documentaries, it is written from a certain vantage point and with a certain agenda. Billy Mitchell is portrayed very negatively in the film, and so much of that is his own fault. He comes off as a cocky bastard that the audience desperately wants to see get his comeuppance. He is elusive and seems to live in a world that he has constructed around him, reality be damned. Wiebe, on the other hand, is the Everyman in this story, the one we're all rooting for even though I'm certain there is more to the story than was presented in the documentary.

Perhaps I have my own prejudices to deal with when watching a movie like this. Guys like Billy 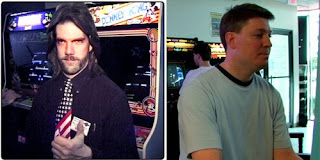 Mitchell (or at least how he came across in the documentary) really piss me off. At the end of the day, it's a fucking score on a video game, not the cure for cancer. It is kind of, in my mind, what happens when you get too much of your identity caught up in one thing. That one thing can be a job, a marriage, a blog, a whatever. Mitchell's entire raison d'etre seems to be having that high score on Donkey Kong, come hell or high water. And when Wiebe threatens to take that away, his world crashes down around him. Watch the scenes where Mitchell's protege Briah Kuh is giving Mitchell the play-by-play of Wiebe's Donkey Kong game at Funspot in New Hampshire. It's almost comical how seriously Mitchell takes it.

Wiebe, on the other hand, was the kind of guy I'd like to go out and have a beer or lunch with. He's seems so unassuming, so down to earth. He seems like, well, a geek like me (and many others that have come out of the geek-closet this week.) While there's no denying that he takes Donkey Kong every bit as seriously as Mitchell, it doesn't seem to dominate his life or define his identity as it does for Mitchell. In the same way that guys like Mitchell piss me off, guys like Wiebe are the kinds of people that I really like to get to know. I almost can't put into words, but he seems like a kindred spirit. Of course, I can't know that from the movie, but I'm sure that many of you know what I mean. The people that attract me the most are those that have a veneer of ordinariness, only to find out upon closer inspection, their real selves are at severe odds with that projected ordinariness.

So as you might expect, I saw a mirror of myself in that movie. While I am certainly not a Donkey Kong aficionado (I can barely clear 4 boards on a good game), I am not that which so many would assume from outward appearances. Yes, in many ways, I am. But that's the part of me that's the least interesting, at least to me. Certainly, it is not just an important but an essential part of who I am, because it's the part of me that is a good husband and attentive father and hard worker at my job. But as I am so fond of saying, there's a lot more to me than that. Those closest to me know that for certain. Many who read this blog see shades of it. I am probably not nearly as enigmatic as I think I am, but hey, what can you do?

This week has been all about embracing the inner geek. I remember being a kid and just being deathly afraid of that word. Nothing was worse than being a geek. Or a nerd. And then along came Revenge of the Nerds in 1984 and while it is ultimately about nerd-empowerment, it also scared me because it seemed like even as an adult, nerdery would follow me everywhere I went. As I've grown older, I've come to embrace the nerd in me. Really, I had no other choice but to do so. I am who I am, and can be nothing else. The harder you try to be something you're not, the more it sneaks up on you and demands to be heard. I have never been unhappier in my life than when I am trying to be something that I'm not. As the old adage says, honesty really is the best policy. But I am also not stupid. I realize that blazing honesty and wearing your heart on your shirt sleeve is not appropriate in every situation. But being who you are, even when it means not being what your outward appearance would lead other people to believe is at least being true to yourself.

That's a lot to get out of a movie like The King of Kong. It probably helps that this week has been Nerdery Week. I can't think of a more appropriate movie to have watched during this week.

Now excuse me, I'm off to play Donkey Kong.

Apropos of nothing, when I told Anna what the movie was about, she shot up out of the chair and went over to her computer, loaded up MAME and announced that she was going to get the world's highest score on Donkey Kong. Rock on, Anna.
Posted by Dan at 2/21/2008 10:25:00 AM

But being who you are, even when it means not being what your outward appearance would lead other people to believe is at least being true to yourself.

I struggle with this sometimes myself, especially at work. I have very little in common with most of my team members, so I find myself shifting my personality and my topic of conversation so that I'm a little less myself and a little more them. Otherwise, I just get a lot of blank stares.

Honestly, it's not their fault they don't watch the same shows or movies or read the same books. It's also not their fault their realm of experience is completely different than my own. So if I want to talk to someone during the day it's easier for me to be the one that adapts.

I agree entirely, though, that it's a bit exhausting being a slightly different me. There's nothing like shedding that skin and being entirely myself while making Jabba the Hutt jokes as I hang out with people from my own tribe.